Hope only fades if you allow it to…

Now that Talon Haraway has been taken captive by the Arcaians, Ambry knows it’s only a matter of time before he is executed. But to make matters worse, she must go against her once-best-friend, Gwynn Hawkes, to free him. Whether Ambry likes it or not, drinking those tears changed Gwynn. Not only is she subjecting her kinsmen’s magic, but with Tyrus preoccupied with his upcoming war, Gwynn is acting more and more in Tyrus’s stead, giving commands and leading skirmishes.

Ambry refuses to believe Gwynn is gone for good, however. Along with juggling with her forbidden feelings for Talon, her desire to free her people’s magic, and the ever-growing need to protect the tears from being drunk, the solution to stopping Gwynn means hoping harder than she ever has before. Hope can’t undo what magic has already done, but paired with action–and her newfound magic–Ambry’s hope in Gwynn might be just what her friend needs to leave the dark path she’s on. 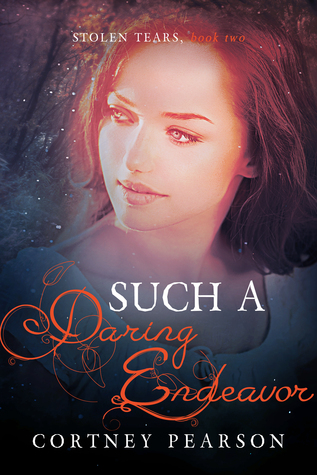 “In the vision, I was sitting on a bench,” says Jomeini, her eyes distant. “The sunlight beat warm against the stone I sat on, but the wind that blew was brisk and harsh. A storm rode on that wind, a storm I knew I wouldn’t be able to stop. Afterwards, I drew this.”

Jomeini pulls another card from beside the others and hands it to Shasa.

“It’s a coat,” Shasa says, confused. She traces a finger over the handless, headless trenchcoat, drawn as though it’s blowing in the very wind Jomeini claims she felt during its vision.

Chills brush across Shasa’s skin. “Color it yellow, and that could be Craven’s.”

Jomeini rubs her arms as if chafing away whatever memory fills her mind at that moment. Shasa wonders if it’s the same one she’s recalling, the sight of the dingy yellow trenchcoat Craven wore the day he snatched Shasa from right in front of the Triad Palace into an abandoned building and stole her magic then and there.

“What does the star mean, then?” Shasa asks. When Jomeini doesn’t answer immediately, Shasa continues thinking aloud. “Stars provide light in the night sky. They’ve held their places for years, giving sailors something to sail by.”

“But this one is a shooting star,” Jomeini says. “This one is setting off on its own course.”

“And you think it pertains to Tyrus?”

Jomeini shakes her head. “I thought so at first. I Saw Tyrus, yes. But I Saw others with him. Among his soldiers was a blonde woman I didn’t recognize.”

“A group of stars,” Shasa says inwardly. “With one straying from all the rest.”

“It means change is coming, and someone is at the center of it. I thought it was Tyrus, but now I’m not so sure. See the other star beside this? See how the bursts on the star go one way, so it looks like the star can be spearing to the left? But if you look at it this way…” Jomeini turns the card until it’s upside down. “Now the star could be shooting to the right.”

“Not in so many words. It’s more complicated than I can explain, but something Tyrus is going to do will be as vast as the effort of crossing an ocean with no other guide but the stars. It’s going to change the world as we know it. And depending on what we do, that change is going to veer the races one way or the other. For good.” She holds the star picture one way. “Or for ill.” She turns it the other direction.

Shasa swallows and takes the card, experimenting. The star’s direction turns with each flip, more indecisive than the weather. It’s like the picture of a smiling man with a furrow in his forehead her mother used to draw. She would turn it upside down, and though the picture hadn’t changed at all, the man would look sad and menacing instead. All because of one or two carefully placed lines.

“So how do we get this change to veer in the direction we want it to go?” Shasa asks.

Jomeini doesn’t answer. Instead, she fingers the collar at her throat. The two girls sit in the boat in silence, bathing in the deep wake of their thoughts. 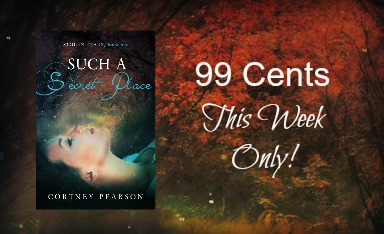 Purchase book 1- Such a Secret Place (99cents during the blitz!)

Join Ambry Csille in her quest to rescue a stolen vial of tears containing the most powerful magic ever shed. Ambry makes deals with sirens, plunges deep into love with a mysterious warrior before knowing the secrets of his past (including the very reasons she can’t be with him), and fights off soldiers who wield claws that can suck the very magic from her bones.
Purchase Links:
Amazon / Barnes and Noble / Kobo / iTunes / Scribd
AUTHOR BIO:
Cortney Pearson is a mother, a musician, and a lover of all things pink and sparkly. She is the author of Phobic, about doors that shouldn’t be opened, and the Stolen Tears series, about an enchanted vial of tears and the girl chosen to wield them. Cortney lives with her husband and three sons in a small Idaho farm town. She believes anything can be made better with a good attitude and a book tucked away for those just-in-case times.

6 thoughts on “Such A Daring Endeavor Book Blitz and Giveaway”