Summary from Goodreads:Experiment 318: Gone RogueShay is scientific experiment #318. Science may have created her, but she refuses to allow it to blind her to the difference between right and wrong…Synthetic Hominid Assumed Youth (S.H.A.Y.) is eighteen years old, which means she has completed Phase One: Developmental. Shay no longer requires the assistance of her Optional Human Parent, Darla, who has guided her in the process of discovering her morality. Shay loves her easy, charming life aboard the marine research facility and doesn’t want it to change.Phase Two: Experimental. All S.H.A.Y. ages 18-20 will experience loss…Darla shouldn’t have to die because of an experiment. The thought of losing the only parent she’s ever known is too much. Determined to make sure the scientists at the facility don’t get their way, Shay entraps Darla in a transport device to escape across the Miami Border. There, on the mainland, law enforcement will keep her human parent safe.

Escape Mission: Failed…Shay crashes into one of the Lone Keys off the coast of Florida, abandoned to all humanity, except for the stranger who drags her ashore. Shay must get Darla to safety or she will die of radiation poisoning trapped inside the Freeze Portal, but Shay can’t do it alone. The boy who found her, an Ersatz Reproduction Intelligence Clone (E.R.I.C.), is her only hope. He has adaptation skills she needs to complete her mission. Eric was created by the same scientists who want to kill Darla, though. She tries to keep their interaction strictly business, but it’s hard to hate him. He’s flirty, charming and not to mention devastatingly handsome. Shay must put her trust in Eric’s hands if she wants to save Darla from her fate. It may be worth her heart, but will it be worth her life?

S.H.A.Y. is a short novella that gives us a glimpse into the intriguing world of The Almost Series. I think the world building that the author has created is very in depth, well drawn out, and detailed. Though I do think the story starts off a tad bit complex. There were way too many acronyms in my opinion and I got lost with the code names and what they stood for pretty easily, but I think the characters were so sharp, so well defined that it still was a story that pulled me in.

S.H.A.Y. is about a humanoid trapped in a science lab and approaching her termination date. With the help of her artificial mother (Aimee), Shay escapes only to run into her E.R.IC. Desperate to keep her basically adoptive mother alive, Darla, Shay does whatever she can to set her free.

Shay is kind and compassionate, very driven and courageous. As far as characters go, I think she’s my favorite in S.H.A.Y.  I also really enjoyed her Aimee, which is her artificial mother. Aimee is an AI, but she appears to have emotions like a human. She cares of Shay and does what she can to help her escape the science labs. When Shay meets Eric I honestly wasn’t so sure about him at first. Shay had crash landed from her escape from the facility and Eric ends up finding her. Eric is a bit insensitive and had no problem raking his eyes from head to toe over Shay (to the point that it kind of bothered me because of the manner in which he did it).  I also didn’t like his nickname for her. He called her cream-puff. Another insensitive tally against him. But towards the end of the novella Eric grew on me somewhat. I think he has the potential to be better than what he first appeared to be. I guess I will have to read more in order to find out!

The novella was a little on the short side (I would have preferred it to be a few chapters longer), but it did leave me hanging and wanting more. I think S.H.A.Y. is intriguing and definitely worth checking it out. I think Christina has created a very intriguing and alluring world and I look forward to reading future reads by her. 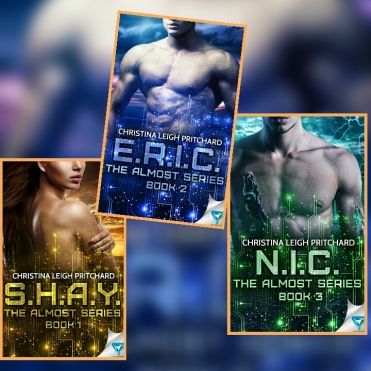 Christina Leigh Pritchard was born and raised in South Florida. Her first stories were written at the age of nine in spiral notebooks and in the various diaries she kept.Since she’s upgraded to a computer, she’s completed over fifty books, including her ALMOST Series, signed with Limitless Publishing.Christina Leigh Pritchard is still going strong with many more to come! Her genre’s include science fiction, dark fantasy, young adult, drama, suspense, historical romance, multicultural, comedy, poetry and many more.

17 thoughts on “SHAY Review and Giveaway”