Aemi lives in a village carved from stones and surrounded by sea. She wins spear-throwing competitions in disguise and earns slaps from her spoiled mistress by talking back. She hates being a slave. She survives by remembering her mother’s tales of home, a paradise called Perilous.

Aemi intends to find it.

But then, black ships rise from the sea in the night. Aemi is captured and taken to Itlantis, an underwater world of cities and gardens encased in glass, dazzling technology. and a centuries-long war.

But when Aemi witnesses firsthand an attack by the Dron, she realizes not all is as it seems below the sea.

I really enjoyed this book. Once I started it, I constantly wanted to keep reading despite the day to day responsibilities I needed to do. I finally ended up downloading it on my phone so I could read it any time I wanted. What a richly filled world with twists and turns that Ellison created. Everything seemed effortless in its complexity.

First, all my beliefs were completely wrong. Which was great. I kept thinking I knew where things were going to go or what secret was going to be revealed. Nope. Plot twist, there’s going to be many plot twists. I loved it. It’s a great book for many ages. Aemi is clever, skilled, a bit naive, and a great role model as well. Her perspective is very observant but she still has much to learn before knowing the truth. All her beliefs and feelings are twisted. It’s so shocking by the end. I couldn’t read fast enough.

All the other characters are lovable as well. Even characters that are briefly in the book are so intriguing and well developed. I hope to see them again in book two. The friendship between Aemi and Lyssia was profound. I really enjoyed their interactions and growth that they inspire in each other. Even when Aemi accidentally reveals the truth about herself, I felt like it was on purpose in a way. Once treated cruelly by her masters, she eventually allows herself to open up to Lyssia. She realizes that she’s found more friendships in her new life then she ever had before. The thoughts of escaping back to the surface is plagued with doubt. Especially with more and more revelations that occur.

Along with all of these conflicts and surprises is Nol. The only one from her formal surface life. Once obnoxious in his authority, he is now an angry captive like her. Aemi’s thoughts and descriptions of Nol were amusing to say the least. Since childhood, they’ve had a rivalry and that doesn’t seem to change in their new circumstances. However, he is a conundrum to her and is frequently in her thoughts. I’m anxious to see what will happen in book two.

I could keep going for this book…instead I’ll encourage you to read it. I’ve already downloaded book two! 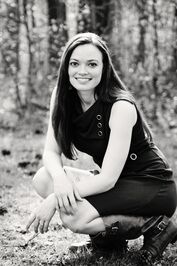 I’m the author of the Frost Chronicles, an Amazon bestselling series and source material for the adventure app game Frost by Delight Games, as well as numerous other fantasy and science fiction novels. I love putting a dash of mystery in everything I write, an ode to a childhood spent reading Nancy Drew, Agatha Christie, and Sherlock Holmes. I can’t resist adding a good twist in the story wherever I can.

I wish I could live in a place where it’s always October, but until that’s possible, I make my home in humid Atlanta with my husband, children, and two spoiled cats.

3 thoughts on “Of Sea and Stone Review”