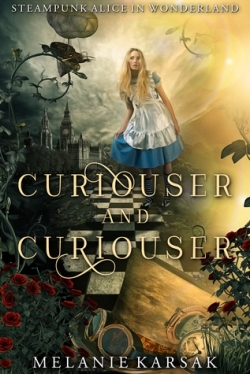 To save the Hatter, Alice must work with the one man she despises so much that she might still love him.Alice thought she’d turned over a new leaf. No more working for Jabberwocky. No more making deals with the ruthless Queen of Hearts. No more hanging around The Mushroom with tinkers, tarts, scoundrels, and thieves in London’s criminal underbelly. But she’d been bonkers to dream.

Hatter’s reckless behavior leads Alice back to the one person she never wanted to see again, Caterpillar. Pulled into Caterpillar’s mad schemes, Alice must steal a very big diamond from a very royal lady. The heist is no problem for this Bandersnatch.

But protecting her heart from the man she once loved? Impossible.

I approached the guards cautiously, stopping just short of the entryway.

They looked from me to one another, unsure what to do.

I stared at William who toked on a hookah pipe, blowing a ring of smoke in the air.

William, who’d been lounging on a chaise, sat up and looked out at me through the sheer fabric.

He smirked then leaned forward. “Who are you?”

His question silenced those around him. Everyone knew who I was.

“When I woke up this morning, I was Alice.”

He rose then moved closer. “But who are you now?”

“That depends. Who are you? Which Alice is here depends on your answer.”

He came to the curtain. “Well then, that makes it hard to say.”

“I’m sure it does, given how good you are at betraying your true nature.” I was trying to keep a lid on my feelings but was failing miserably. As he drew closer, I smelled the sweet aromas of jasmine and sandalwood that always clung to him.

“You’re one to talk. So, what does Alice from this morning want?”

I frowned at him.

“Don’t get too frustrated,” he replied then pulled the curtain open, beckoning me inside, “or the other Alice might peek out. Come.”

I entered the semi-private enclosure. Inside, I spotted William’s chief bodyguard, the Knave. A tart lay naked, asleep in an opium stupor, on a chaise nearby.

I nodded to the Knave.

“Alice,” he said with a soft smile. I caught the lilt of his Irish accent in his voice. His real name, of course, was Jack. He’d been friends with William and me since we were young. As was the habit in the industry, Jack went by a pseudonym. If someone ratted you out, it was better that they had no idea what your real name might be. It’s a lot harder to track a man named Knave than it was Jack O’Toole or Caterpillar than it was to find William Charleston.

“Have a seat, Alice from this morning,” William said.

I sat on the chaise, gently pushing aside the legs of the intoxicated strumpet.

“What brings you here?” he asked, rubbing a thoughtful finger across his chin. He’d grown a short, neatly-kept beard since I saw him last. It looked very handsome.

“Rabbit stole a pocket watch from my employer. I want it back.”

“What does that have to do with me?” William asked.

“Cake?” one of William’s girls offered, holding out a tray on which sat a colorful selection of petit fours.

I looked down at the small treats. I could smell the aroma of the frosting, nearly taste the sweet confections in a glance. I could see the game was truly afoot. They were my favorite. I raised an eyebrow at William who smiled.

The stubborn part of me wanted to tell William, and the girl, to sod off. But the part of me who hadn’t tasted strawberry frosted, vanilla-sweetened, and raspberry-and crème-filled cake in months could say no such thing. I lifted a small cake and popped it into my mouth, feeling annoyed and enraptured all in the same moment. I closed my eyes, savoring the taste. They’d come from my favorite baker. William had remembered. Once more, angry and elated feelings swept over me.

“Drink?” the girl then offered.

I opened my eyes to see the girl was holding a bottle of absinthe.

“Alice isn’t the type. Do you want some tea?” he asked.

I shook my head.

“Run off,” he told the serving girl, waving her away.

The girl turned to go, but before she could leave, I reached out and grabbed just one more petit four: pistachio and chocolate. I popped it into my mouth.

“I’m glad you like them,” William said, grinning at me.

The warmth of his gaze made me angry. He didn’t have any right being this nice to me. “The pocket watch?” I asked after swallowing the last bite.

“Alice from the morning is very business-oriented. Right, then. What of it?”

“I hate it when you play coy. And you’re not very good at it. Rabbit entered this tent not a moment before me. I want that watch. Must I remind you that we have an understanding? You don’t tangle in my affairs, remember? It was agreed upon.”

“You certainly are Alice from this morning,” he said with a frown. “Not that the outfit didn’t give it away. Crisp white apron you have there, Alice. But the blue maid’s dress brings out your eyes.”

“We all wear costumes, don’t we, Caterpillar and his Knave?” I said, casting a glance at Jack. “Is he Jack or is he the Knave? Are you Caterpillar or are you William? Hard to tell what’s truth and what’s fiction, isn’t it?”

“He shouldn’t be far. You waved him off just a moment ago,” I said.

Chuckling under his breath, Jack left.

“Why did you bring me here?” I asked.

Now I was getting irritated. “Yes. Why did you bring me here?”

“There is no such thing. Rabbit would never steal from me or mine unless you told him to.”

“William,” I replied, a warning in my voice.

“Let’s just say that a pocket watch brought you here,” he said. 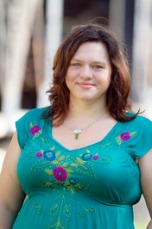 New York Times and USA Today bestselling author Melanie Karsak is the author of The Airship Racing Chronicles, The Harvesting Series, The Burnt Earth Series, The Celtic Blood Series and Steampunk Fairy Tales. A steampunk connoisseur, zombie whisperer, and heir to the iron throne, the author currently lives in Florida with her husband and two children. She is an Instructor of English at Eastern Florida State College.
Author Links
Website | Twitter | Facebook | Goodreads | Pinterest | Newsletter

6 thoughts on “Curiouser and Curiouser Blitz”