When optimistic seventeen-year-old orphan Deirdre travels to Neo-London, a city created after a near-apocalyptic attack by Unseelie faeries, she is caught in the tension between faeries and the Iron Guard, a militarized faction created to keep the peace. After a banshee tells her fortune, Deirdre develops destructive magical abilities but quickly discovers she cannot control them. These powers soon make her a target of Alan Callaghan, an extreme anti-faery general.

His sons, Iain and James, cross paths with Deirdre. Iain is a rookie soldier in the Iron Guard trying to atone for past mistakes and keep his younger brother from harm. James, a fourteen-year-old aspiring scholar fascinated by faeries, becomes fast friends with Deirdre. They soon plot to escape the barriers and lies of the city to find answers about her magic and James’s disappeared mother.

However, when Deirdre is framed for a treasonous crime, their search for answers soon becomes a quest for freedom. Beyond the iron walls of Neo-London that protect the city from the Winter Court lies a landscape of unchecked magic, faeries, and monsters.

They were following a deer trail between two groves of trees when suddenly the birds shot up from the branches around them, beating their wings fast into the sky, crying out in alarm. They both stopped, looking around.

“Do you see anything?” James asked, sidling beside her.

She shook her head and was about to reply when the ground shook hard beneath them, knocking them both off their feet. Immediately she pushed herself up, her gaze darting up and down, searching through the darkening groves.

The ground shook again, but this time they were ready; they both got to their feet, and Deirdre tugged on James’s shirt for him to follow her. Staying low, they continued down the narrow path, both alert as hunted rabbits.

Once again the earth shuddered, making them stagger.

“What is going on? What’s happening? This can’t be an earthquake,” James began to ramble in a hoarse whisper. “It could be a giant monster or something with earth-shaking magic or—”

“James.” Deirdre grabbed his shoulder hard, nodding up above the nearest tree, her mouth a grim line.

He followed her gaze and gasped.

Behind the nearest tree was what first looked like a gigantic, grey-green boulder, thick as five trees. But through the leafy branches a gigantic, single eye looked at them. The eye was humanoid save for its size and deep bloodshot color, and it stared at them without blinking. The rest of the face was hidden.

James was gibbering, perhaps trying to guess what it was but falling short of pronouncing anything clearly. They were frozen as the eye considered them, looking from one to the other.

Then it shifted, and they heard a low growl as the eye rose up higher, narrowing slightly, fixed on them.

Then the eye stopped and there was a slow sniffing sound. It continued on for nearly half a minute, the pupil of the eye looking away and around, an invisible nose loudly smelling the breeze.

Then, without another glance at them, the eyeball disappeared and the ground shook again and again. With each stomp, the hidden giant moved farther and farther away, the clomping and sniffing fading off into the distance.

“W-w-what was that?” James finally gasped. “Was that… what…”

“A…” Deirdre gulped. “It was a giant or something, I guess. And it didn’t seem to be all that interested in us.” She giggled hysterically. “Lucky us!”

“It could have been a giant. But wasn’t it a bit small? And there aren’t many giants.” James rambled on, “Probably it was something else, like a Red Cap or troll or a Fachan, or maybe…”

“A Fachan? Fachans come down this far? I thought they were only in Scotland.”

James nodded; some color was coming back into his cheeks as he talked. “They used to just be up there, but they and other Winter Court creatures have been coming farther and farther down south. I think the Court sends them. I heard my father talking about it once.” He shivered. “Should we… What are we going to do?” 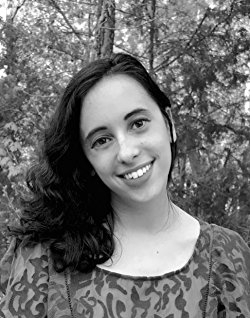 M. C. Aquila graduated from Winthrop University with a degree in English. She grew up in Pittsburgh, PA but currently resides in South Carolina. When she is not co-writing the Winter’s Blight series, she tutors both native and ESL students in English, giving her a renewed love for the strange wonderfulness of the language. She also enjoys drawing daily, baking recklessly, hiking in the Blue Ridge Mountains, searching for the best red wine in existence, and reading any story with a villain she loves to hate.

K.C. Lannon graduated from the University of South Carolina with a Bachelor of Arts in English. When she is not co-writing the Winter’s Blight book series, she tutors English, walks dogs, and dabbles in painting, drawing, or just making a general mess on paper. She enjoys cooking vegetarian meals, daydreaming she is a Gothic Heroine, and playing tabletop RPGs.

1 thought on “The Changeling’s Fortune: Blitz”