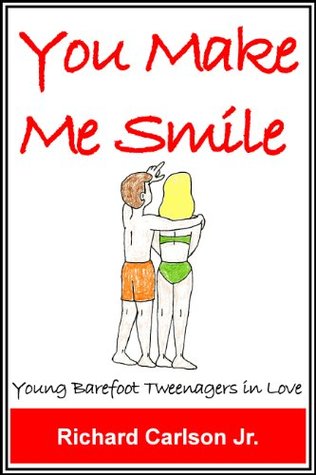 Book Synopsis: What could be worse? Vinnie has to visit his aunt for the summer and be far away from his friends. And this was the summer when he was sure he would get to kiss a girl for the first time! Then good luck comes his way: he meets Jenny, who is also twelve and the prettiest girl he’s ever seen! Vinnie is very much in luck, as Jenny likes him, too. But then Jenny’s tough ex-boyfriend enters the picture, looking for revenge and wanting his old girlfriend back. Will Vinnie keep Jenny and survive Decker’s wrath? You Make Me Smile: Young Barefoot Tweenagers in Love is a sensitive romance for young tweenagers thinking about love.

You Make Me Smile: Young Barefoot Tweenagers in Love is a very cute pre-teen love story. It’s innocent, has some drama in it with the ex-boyfriend, and is a light, enjoyable read. A great summer read for pre-teens!

What I didn’t like about the book: There’s a few sexual connotations in this story. Even though they are innocent and light references, I felt that it detracted from the overall story. The boy’s wishes for wanting to marry and have kids I do not believe would be typical for a pre-teen. However that may have been the author’s intent, that this boy isn’t your typical boy.

What I did like about the book: It’s an innocent, heartfelt, pre-teen love story. It’s very cute and the main character Vinnie is a very sweet boy. It does mention sexual awareness and how one should wait until old enough. Both Vinnie and Jenny think about the subject matter and how important it is to wait at different times in the novella. It’s pretty cute when Vinnie kisses the main girls cheek the first time! It’s such a sweet moment in the book, and he’s very excited about it! I really enjoyed the elements that Richard Carlson Jr. put in concerning autism. A boy named Adam, whom is Jenny’s brother, has difficulties with communication due to his autism. I thought it was a nice touch to the story, especially since I am an applied behavior analysis and work with children with autism. I believe in autism awareness and I think the incorporation of a child having autism in this novella gives it a just that little something extra special!

This is Richard Carlson, Jr’s first tweenager romance novella! There’s some great elements to this story!

Rich lives in the beautiful desert of the southwestern United States in Tucson, Arizona.

He was diagnosed with paranoid schizophrenia at almost twenty-one years of age. Because of his mental illness, he didn’t realize he had paranoid schizophrenia until over twelve years later when he was thirty-three. Presently, he is still recovering, but life looks very promising for which he is very grateful. He also has obsessive-compulsive disorder (OCD).

Rich believes he first became mentally ill when he started puberty. The time period between when he first became ill and to when he became noticeably ill to others is called the prodrome of schizophrenia. Remembering the best that he can recall, his mental illness adversely affected him socially at school. He strongly supports discovering a method of determining who will get schizophrenia before they are affected by it so they can be treated as soon as possible and the condition not affect their life.

Rich is a highly sensitive person (HSP) who likes children. He likes being a caring person to the people in his life.

Rich is the author of seven self-published print-on-demand books that were written while he was ill. Unfortunately, his seven books do not reflect his best writing and the publication of them was cancelled. He apologizes to anyone who read and/or bought them. Presently, he writes for children and has self-published books via online print-on-demand publishing companies and Amazon Kindle. He looks forward to his work being published by a traditional publisher. Click here to learn more about Richard Carlson, Jr. and his children’s books!

You can add You Make Me Smile: Young Barefoot Tweenagers in Love to your Goodreads!