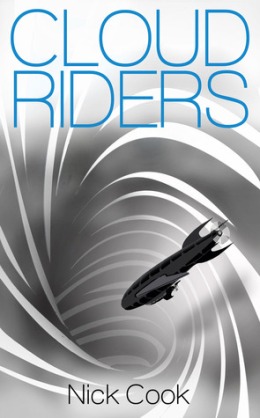 Dom lives with his mom in Tornado Alley, where twisters used to be a way of life. After a year long drought, the family diner is about to go bust and Dom feels trapped, torn between supporting his mother and the urge to escape. Even his relationship with best friend, Jules, is beginning to prickle with feelings he doesn’t want. When the first twister in months appears from nowhere and an airship emerges from the spout, Dom’s world is turned upside down. Its pilots are explorers who make Dom an offer beyond his imagination. But the pilots are hiding a terrible secret. Can Dom uncover the truth and make the right decision before everything he cares for is destroyed?

Cloud Riders:  A fascinating story filled with action, adventure, cool technology and characters that you can easily relate to.  A must read for those who like Sci-Fi.

The story is told through the eyes of the main character, Dom.  I’m not always a fan of books written through one perspective; however, Cook’s descriptive writing flows smoothly and is a strength throughout, as he paints a visual picture filled with twisters, airships, parallel dimensions, faces from the past, royalty, love and secrets.  It’s a story beyond your imagination and you won’t be able put it down.  Looking forward to the sequel…

Be sure to add Cloud Riders to your Goodreads!