Happy Release Day to Carrigan Richards for Under the Winter Sun, book three in the Elemental Enchanters series! 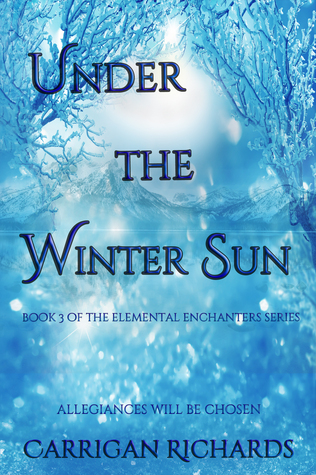 When the previous battle leaves all of the Enchanters powerless and broken, Ava distances herself from everyone. Her closest friends have been kidnapped and she feels useless. All she can feel from Peter is guilt because he could not protect the coven so Ava learns to hide her emotions in order to keep her thoughts at bay. It’s taking more time than she expected for her strength and powers to return and she sinks deeper into a depression.

Once Ava and her coven gain their powers back they start their journey to Caprington to defeat Havok and save their friends. She must choose her allegiance or risk losing everyone she loves.

Carrigan was born in Cullman, Alabama, but grew up in Birmingham, and moved to Atlanta at 18. She earned her BA in English at Kennesaw State University. For as long as she can remember, she was always making up stories and characters inside her head, sometimes using her dolls to act out the scenes.

When she’s not writing (which is rare), she’s spending time with her fiance, family, and friends, listening to music, playing with her sometimes psychotic puppy, or cheering on her Atlanta Braves.