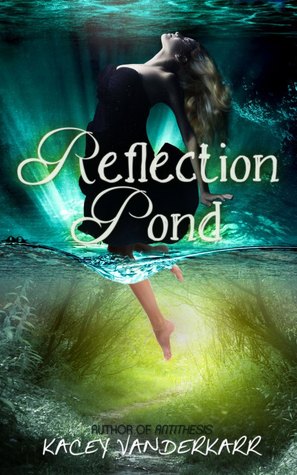 Rowan is a character from the book Reflection Pond by Kacey Vanderkarr.  He is described as being tall with wavy jet black hair that hangs to his shoulders, and light blue eyes.  The fae are beautiful and Rowan is no exception.  He is, intelligent, sarcastic, serious, rude, conceited, and an excellent fighter with both weapons and his hands.  His weapon of choice is the quarterstaff.  There is a darkness inside of him that he tries to keep contained.  One of his friends accused him of acting like an ass and he replied, “I’m not acting.  I am an ass.”  But there is another side to Rowan that he rarely lets others see.  He has put up walls to protect himself from getting hurt.  He can be selfless, loyal, protective and even kind to those that he has come to trust and love.  He does not trust or love easily, but when he does it is with his whole heart.  Each fae has their own power.  Every ones is different.  Rowan is a healer, which is ironic considering he is also a fighter.

Rowan grew up in the human world.  Without family, he was raised in the foster care system and it wasn’t a pleasant experience for him.  One of his foster fathers tried to kill him when he was a teenager.  The faerie trackers found him and he was brought through a portal to the faerie city of Eirensae.  He has been in the city for almost 2 years.  All the young fae, who come here, have an amulet hidden for them to find.  Once they find it they become bound to the city. They must find it by the time they have been in the city for 2 years or they are stripped of their power and sent back to live as a human.  Rowan has yet to find his and time is running out.  He is beginning to believe that he belongs in another fae city, Fraeburdh, the city of war.  He has never felt like he belongs in Eirensae, but he has made a few friends here and is reluctant to leave, especially after Callie arrives.  At first he doesn’t trust her, but she soon wheedles her way into his heart.  It soon becomes clear that Callie is in great danger and Rowan is the only one who can protect her.

Is Rowan a friend or foe?

Here are a few questions to help us find out.

Does the character intend to make good or bad consequences?

Rowan seems dark and angry, but he doesn’t intend to do things that have bad consequences.  A lot of his personality is a front to keep people away.  He is very good at pushing people away.  He is a healer and he enjoys helping people.  If he can’t find his amulet and has to live in the human world, he wants to be a doctor.

Do they perform acts for personal gain or to help others?

Rowan can be selfish, especially with those he doesn’t trust, but it is in his nature to help others.  He would never do anything to hurt the people of Eirensae even though he feels like an outsider.

Are their personality traits noble and with good intent?

Rowan is a mixture of personality traits.  He has some very annoying traits like being rude, conceited, and obnoxious.  These traits have been cultivated to keep people from seeing the real Rowan.  He has some very noble traits.  He can be selfless, loyal, and kind to those he cares about.  He will protect those he loves with his last breath if necessary.

Is the character dishonest?

The fae must tell the truth, but they can twist it a little bit or omit some things.  Rowan is basically honest, but he does try to hide who he really is from others and he will keep things from someone in order to protect them.

Does the character permit selfless acts?

Rowan is a healer and I think you have to be somewhat selfless in order to do that well.  There were a couple of times in the book where Rowan almost died saving Callie’s life.  He holds the life of those he loves more dear than his own life.

Does the character kill without thought or reason?

Rowan was responsible for the death of one person and it weighs heavily on his mind.  It happened when he was a teenager and just getting his power to heal.  His foster father tried to kill him and his foster mother was stabbed when she interfered.  She crawled over to check on him and he used her to heal himself.  He can only heal himself by channeling his power into someone else and then drawing it back into himself.  He was on deaths door and he took too much energy.  His Foster mother died and he blames himself.

Did the character feel guilty about their poor actions?

Rowan tries to protect those that he loves and sometimes bad things still happen.  When he can’t protect them, it makes him feel like he has let them down.  He is very hard on himself and feels a lot of guilt, especially about the death of his foster mother.

If the character did something bad, where they acting out of a past injury?

It is more likely that if Rowan does something bad it is an accident.  He feels like an outsider in the city, but he holds no ill will against the people.  He blames himself and thinks that there is something wrong with him.

Does the character do things out of revenge?

He hasn’t up to this point, but he is very protective of those he loves and I think if something happened to one of them, he could act out of revenge.

Does the character strive to get what they want by any means necessary?

Rowan does strive to get what he wants, but not by any means necessary.  He doesn’t purposely set out to hurt others, except maybe with his tongue.  There is a darkness inside of him and he tries to keep it under control.  It stems from his fae power.   He is very afraid of becoming a monster and hurting others.

I really enjoyed reading Reflection Pond and I must confess that I have read the sequel, Poison Tree.  It was just as good as the first book.  I absolutely love Rowan.  He is a wonderful character.  If you haven’t read these books, I highly recommend them.

2 thoughts on “Rowan: Friend or Foe?”