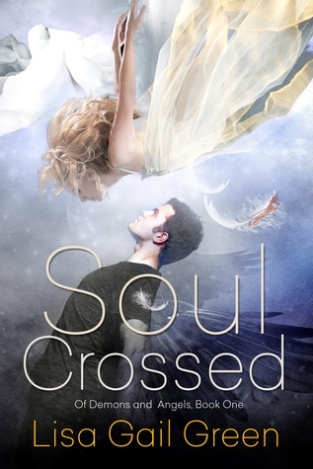 Josh lived a reckless, selfish life, so upon his death, escaping the eternal torments of Hell by assuming the role of a powerful, soul-corrupting demon is an easy choice. His first soul assignment doesn’t seem too hard: the mortal Camden is already obsessed with weapons, pain, and torture. If only Josh wasn’t distracted by Cam’s beautiful friend, Grace.

Grace never expected to die violently at age sixteen, but now she’s an Angel, responsible for saving a soul. She can already see past Camden’s earthly flaws, so the job should be be easy. If only that handsome, playboy Josh would stop getting in the way.

It’s forbidden for an Angel to be with a Demon, so if Josh and Grace stop resisting each other, the results would be disastrous.

And only one can claim Cam’s soul.

I really enjoyed Soul Crossed by Lisa Gail Green. There’s so much to love about this book! It’s told by the POV’s of two characters, Grace and Josh. Grace lived a good life and was killed in a car accident. When she dies she becomes an angel. Josh died because he too was in a car accident, but he was a drunk driver and went to hell. Both POV’s were given the option to do something with their afterlife. For Grace it was become an angel, and then possibly have the chance to see her family again, an offer she couldn’t refuse. For Josh, it was either be the devil’s puppet, or live an eternity in excruciating pain and torture. So Josh became a demon. The two soon cross paths as they both are sent to persuade a soul to either become good or evil. This soul is a boy named Camden, a troubled teen with many problems. Both POV’s attempt to be Camden’s friend, and both can’t seem to stay away from each other. It’s a wonderfully crafted love story. It’s gripping, intense, and has an amazing, epic ending leaving you wanting more!

I adored Josh from the beginning. He too had a rough life while he was human. As a demon, he might be a “bad” boy, but he has a compassionate side that at times is very hard for him to deny. Once he falls for Grace she becomes the only light in all his darkness, making her become the one thing he will do anything for, even if she might not understand what he’s doing.

Grace is pure goodness, but maybe a little naive. I think she doesn’t try not nearly hard enough to help Camden, and when she does, she’s very naive about it. It doesn’t take long for Camden to get doe-eyed with her and complicates things. Still she does her very best until the very end of the book. She too is tested to the limits when it comes to what she would or wouldn’t do for a person she loves. Though honestly, her being naive I think is partly what makes her such a good, innocent person. And she could seriously do with a little bit of Josh in her life!

I simply loved Soul Crossed. Josh and Grace’s story is quite poetic.

I enjoyed most of the story, however there’s  a few minor explicit type of scenes. I understand that Josh is a “bad” boy and a demon, but I think some of these scenes could have been left out or perhaps more implied. Some however made sense and were vital to the plot.

I loved the plot of this story, the main characters and how they grow and become stronger throughout the story, and I love the intense ending! Oh. My. Goodness. That ending! So Epic!

Soul Crossed is a must read for those YA fan’s that love stories about demons and angels, love stories, twists and turns, and action!

Please, please let me have this.
I open my eyes. He waits for me, still and intoxicatingly beautiful. I set my hands on his and feel the prickling sting travel over my fingers and up my arms. Far from pain, it’s like my flesh is alive with desire. If he feels it, too, he does not let on. He simply leads me to the dance floor, never taking his eye sof of me.

I’m thrilled by the sensations running through me and giddy with the knowledge that the Earth hasn’t swallowed us whole. I wrap my arms around his neck and lean my head against his chest, letting our bodies meld together with the music.

For the first time since I died, I feel content.

The only problem is I’m falling for her. The thought of stabbing her in the back like that makes the bottom drop out of my stomach. If it were anyone else, I could do it. I could swallow my conscience and get the job done. But it isn’t anyone else. It’s Grace. My grace.

Lisa Gail Green lives with her husband the rocket scientist and their three junior mad scientists in Southern California. She writes books so she can have an excuse to live in the fantasy world in her head. She likes to share these with readers so she’s represented by the lovely Melissa Nasson of Rubin Pfeffer Content. She has a parrot but would most definitely get a werewolf for a pet if she weren’t allergic.