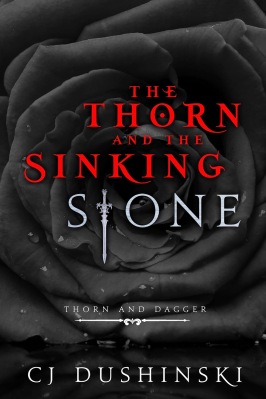 Warring families. Forbidden love. And danger they can’t escape…Daggers. Roses. Cowboys. Boat Men. Survivors of Earth’s Last War, four “families” vie to rule the dreary streets of Rain City through violence and blood. Valencia Hara, Princess of the wealthy Black Roses, is raised in warrior ways with sharpened steel. But she is no ordinary Rose. She is Cursed—tainted with the ability to see seconds into the future…To avenge his father’s death, Sebastian Leold, of the rival gang Two Daggers, must face off against the Black Princess, he with his dagger, she with her katana sword. Yet a secret from a shared past leaves him unable to kill beautiful Valencia; nor can she kill him. For they once knew each other beyond their blood feud…and they have more secrets in common than they know. But in a world filled with vengeance and violence, there can be no room for love…

The Soundtrack to the Thorn and the Sinking Stone:

As with many writers, music is a huge inspiration to my work. I don’t generally play music while I write; I tend to require complete silence in order to let the scene come to life the way I truly intended, without outside influence. But, prior to actually putting the words on paper, a lot of my scenes, characters, and elements are completely inspired by music. I’ve actually had this list of songs in a word document titled Song List since 2009, the year I began writing The Thorn and the Sinking Stone. Every song on the list somehow inspired the story, as you’ll be able to see quite clearly after reading. I never intended to share the list, but now that it’s all over, it seems like the story can’t quite be fully appreciated without the soundtrack that inspired it. Some songs you may know, most you won’t, so I encourage

For your listening pleasure, here it is…

Rain City – Turin Breaks: Well this one is quite obvious, isn’t it? This is how Rain City came to be. Something about this song always captured the city in my head. It was a little haunting, but hopeful too, just like the city where Sebastian and Valencia live.
O’ Valencia – The Decembrists: Again, another obvious one. And this is a big one. This song inspired the whole story. There are elements that are taken, quite literally, from the lyrics. Forbidden love, two warring families, a murderous brother… this, folks, is where it all began. This is the song that made me sit up one day and say hey, I should write a story about this, it’s so good.
Run – Snow Patrol: I don’t think a more beautiful song exists. This song has always given me chills. I could still listen to it all day, every day and never get sick of it. The desperation, the longing…it completely captures how I wanted Valencia and Sebastian’s love to feel to the reader—the kind that makes you sad and happy at the same time.
Volcano – Damien Rice: I debated keeping this song on the list because it actually inspired a secondary relationship to the story that didn’t make the final cut. But it felt wrong to remove it, since it was very much part of the initial process. A very dark, one-sided type of love. Maybe it can make a reappearance elsewhere, in another story, another time.
The Funeral – Band of Horses: This is the song that inspired the opening scene. I struggled for a long time on the perfect place to begin the Thorn and the Sinking Stone. And then one day while driving in my car this song came on, and I thought, ‘Yes, that’s it. We’ll begin where another story ended…with Lucky’s death.’ This is the song I imagine playing in Sebastian’s head as he watches his brother carry his father’s casket to the boat.
Swords – Band of Horses: Another Band of Horses song you say? Well, yes. Because they are awesome. And if you don’t know them, check them out. This song really reminded me of the Two Daggers and the Leolds and their bond as brothers. It helped shape them as a family more than a gang, which is drastically different than that of the Black Roses.
Night-watchman – Bell X1: Another stellar Irish band (after Snow Patrol). Something about this song was so, so sad to me and reminded me of how Valencia must feel when she looks out of the city and how alone she must feel in her Curse, hunted and unwanted. And somewhere in there, just the little bit of hope, like how she feels with Sebastian. And now you know why the Watchmen are called the Watchmen.
Simple Song – The Shins: Just a simple song. I love this, because that’s exactly what it is. It feels so simple. So peaceful. So loving. And I feel as if this is what Sebastian strives so much to achieve. A way to lead a simple life…
I’ve Got Friends – Manchester Orchestra: Just a little bit of angst here. But you can’t really write about being a teen without a dash of angst. And for me, this song sums it all up. When I listen to this, I feel like I can actually hear Sebastian and Valencia screaming it, while their respective families stand in the background, wanting to tear them apart.
Yellow –Coldplay: Everyone needs a little Coldplay in their writing. To me, this is exactly how Sebastian feels about Valencia. There is nothing he wouldn’t dofor her, to reach her. To him, she is perfect. She is everything he is fighting for.

Crawl – King of Leon: A little anger to go with that angst. This isn’t a perfect love story, as most in real life go. There is a lot of crap these two must go through for even the sliver of a chance to be together. For me, this song really summed up the struggles of their relationship. This is a little bit of both Sebastian and Valencia at their worst.
I’ll believe in Anything – Wolf Parade: This song is a rarely known gem. This is mainly for Valencia, when her walls begin to fall and she first falls in love with Sebastian. She is blinded by him and all the beautiful things in him she’s never seen in anyone else. She’s always been somewhat naïve, and now, in her eyes, he can do no wrong, and she would follow him anywhere.
I Will Wait – Mumford and Sons: Would you wait for the one you loved? Despite distance and blood feuds and loyalties? This song inspired a lot of the challenges Valencia and Sebastian face throughout their growing relationship. I can’t listen to it without wishing that all love in the world felt the way this song makes me feel.
Well, that’s it! I hope you take the time to listen to a few of the songs that inspired the Thorn and the Sinking Stone and I hope they allow you to imagine the world of Rain City a little more vividly.

About the Author
While attempting to navigate life as a responsible human being, CJ graduated from university with a B.Comm and worked her way along as marketer, copywriter, and graphic designer to earn a paycheck while pursing her passion for creating fantastical stories set in dark and wondrous corners of the world.  Born amongst the wheat fields and open skies of the Canadian prairies, CJ’s imagination has always run wild, taking her on adventures across the world from modeling in Seoul, South Korea to backpacking through Europe and surfing (poorly) in Hawaii.
After wandering through ancient cities and civilizations, learning from diverse cultures, and surrounding herself in new experiences, CJ was inspired and began work on her debut Young Adult novel THE THORN AND THE SINKING STONE, to be published by Entangled Publishing 2014/15. CJ currently resides in Calgary, Alberta Canada – home of the Canadian Rockies – and keeps one hand on her passport and pen at all times, ready to pick up, see the world, and weave her experiences into stories.
CJ is represented by Marlene Stringer of the Stringer Literary Agency LLC.
Author Links: