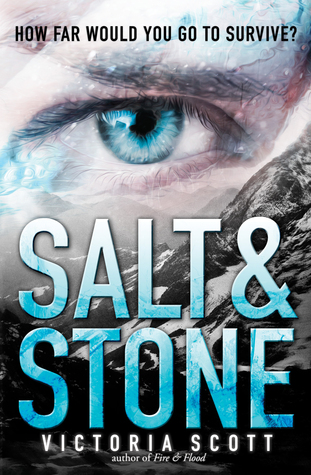 What would you do to save someone you love?

In Fire & Flood, Tella Holloway faced a dangerous trek through the jungle and across the desert, all to remain a Contender in the Brimstone Bleed for a chance at obtaining the Cure for her brother. She can’t quit–she has to win the race, save Cody, and then fight to make sure the race stops before it can claim any more lives. In the next legs of the race, across the ocean and over mountains, Tella will face frostbite, sharks, avalanche, and twisted new rules in the race.

But what if the danger is deeper than that? How do you know who to trust when everyone’s keeping secrets? What do you do when the person you’d relied on most suddenly isn’t there for support? How do you weigh one life against another?

The race is coming to an end, and Tella is running out of time, resources, and strength. At the start of the race there were one hundred twenty-two Contenders. As Tella and her remaining friends start the final part of the race, just forty-one are left–and only one can win.

Salt and Stone by Victoria Scott was purely amazing. It’s action packed right from the start! There’s so many twists and turns in this race, and you aren’t sure who’s going to back stab who and who’s going to come out on top.  I have to be honest there are moments that just wrenched my heart in this book, but I won’t tell you what it is because I don’t want to give away any spoilers. I love the Pandora’s in this book. Tella really seems to connect with these genetic animals, and they in return seem to adore her. I love Maddox in this book. He is fierce and loyal to Tella.

I loved Tella’s character growth in this book. In Fire and Flood we see Tella as a little timid and uncertain. She follows Guy around because she knows he’s her best bet for survival. But in Salt and Stone Tella grows into a leader, that stands up for herself and isn’t afraid to take charge or to voice her opinions. This seems to really surprise Guy at first whom always feels like he needs to protect Tella on some level. But Tella doesn’t want nor needs to be protected and we really see her shine in Salt and Stone. I’ve read some reviews where other readers think Tella is rude by this action, but I think with everything going on in Tella’s life, going from her world before The Brimstone Bleed to this race of death, betrayal, and survival, that Tella NEEDS to be more than what she was. And she wants Guy to see her for who she’s becoming, not for the scared, timid girl she was when she first started that race. She’s stronger, fiercer, braver, and it takes him awhile to truly see the new Tella, and to love her all over again and even more for who she’s become. Because she’s no longer quiet and timid and scared, she’s his equal. And together they make a valuable team.

I was a little annoyed with Guy at times in this book. But I love how Tella handles it. Most girls in the YA genre usually get upset or heartbroken when a guy ignores them and they tend to crumble, but not Tella. She pretty much tells him to figure it out and until then, well lets finish this race. And though Guy annoyed me for ignoring Tella, I understand why he does it. He had a plan for this race, and sharing his plan with her changed things. And the plan no longer was his, but theirs, and they needed to learn to work together on it. Guy needed to learn to trust and lean on others, and it takes him awhile, but in the end it makes their team and their mission more indestructible. Guy is quiet and brooding, but even so he allows Tella the chances to lead even though it was probably very hard for him, but in the end I think it made him a better person.

Salt and Stone takes us through the last two ecosystems of the Brimstone Bleed: the ocean and the snowy mountains. The stakes are high and everyone is trying to save someone they love. There’s so much to uncover in this book. There’s murder, lies, non-stop action, spies, and a growing love. I really enjoyed how Victoria Scott handled the love story in this book. Often time authors like to do something to our two main characters that obviously love each other and are end game. Sometimes authors do things to our characters that I terribly dislike, but not Victoria Scott. I will be honest there isn’t alot of “romance” in Salt and Stone as compared to Fire and Flood, but it was beautifully done. Plus there’s so much MORE going on that honestly it wasn’t about their love, it was about surviving and Tella becoming a wonderful leader. It’s also about Guy accepting Tella for who she is and loving her more for it. I think what Victoria Scott did was make them a power couple, a formidable team, a reason to reckon with. What I love about Tella and Guy is that they make each other be the best parts of them. And isn’t that what love should be? To take those good parts of us and make us better?

Salt and Stone gained some new characters, but also lost others. There was one character in particular I didn’t expect to be killed off, and it was a side character that I rather liked. It was pretty heart wrenching to read. As for a new character that I won’t name just to keep you guessing at it, it will be interesting to see how they play out since they are so complex to the story. And honestly I’m not sure if they are good or bad, and it’s driving me crazy because I so desperately want to know!

The plot was very well played out. I did feel like the story moved through the ocean ecosystem rather quickly as compared to the mountain ecosystem. But again, the story was action packed with lots of character growth, so it didn’t bother me too much that the ocean seemed shorter than the mountain. I thought the action was plenty, there was SO much going on. I binged read this book in a day it was so hard to put down. I had to know what happened to Tella and her friends. I had to know how it played out. I had to know who was bad and who was good. I had to know if Tella saved her brother. Each chapter almost seemed to leave on just enough to make you want to read the next chapter. And let me just say what happens with the Pandora’s I was DEFINITELY not expecting, that alone made me want to keep reading. And it didn’t disappointment! But talk about making my heart ache and wrench and being torn this way and that in all sorts of crazy directions. If an author can do that, than it’s surely a darn good book!

In my opinion Salt and Stone was BETTER than Fire and Flood.  But be prepared to have your heart ache at some point in this book because there’s a lot of death, and only one person makes it out on top and there’s so many characters to love and to want win even as much as we want Tella or Guy to win.

I can’t wait to see what happens in the third installment.

Besides moving through the ocean ecosystem rather quickly (which honestly wasn’t a big deal), nothing. I LOVED this book!

I loved how the author can literally get my heart pounding because of all the twists and turns and what these characters have to do to survive. It’s an epic story, clear until the very end. And I love the Pandora’s. There’s so much to love about them, and they are even better in this story.

If I’m being honest with myself, it’s something I’ve thought a lot about over the last few days, especially since he rescued me from Titus and the Triggers. How would I fare without Guy around? Would I still have a chance at winning, at surviving? I’m not sure why what he said struck me so hard.

Actually, yes, I am.

It’s because it’s the truth.

I stop paddling. “Are you saying you might have underestimated me?”

I feel as if Guy is telling me something, but Braun is rolling over, mumbling, and it won’t be long before everyone is awake. I decide to be direct. “Say what it is you want ot say to me.”

Guy swallows and then flinches as if what he’s about to admit pains him.

“You’re the most amazing person I’ve ever met.”

Two lucky winners will receive a signed hardback copy of Salt and Stone! I was able to snag these beauties at the North Teen Book Festival in Irving, TX. Select on the link below and enter the rafflecopter to win!

Victoria Scott is the author of TITANS (Scholastic, Spring 2016), the FIRE & FLOOD series (Scholastic), and the DANTE WALKER trilogy (Entangled Teen). Her books have been bought and translated in eleven foreign markets, and she is represented by Sara Crowe.

Victoria lives in Dallas with her husband and hearts cotton candy something fierce.