Summary from Goodreads:
Savannah. Courtney. Peyton.The three sisters grew up not knowing their father and not quite catching a break. But it looks like their luck is about to change when they find out the secret identity of their long-lost dad—a billionaire Las Vegas hotel owner who wants them to come live in a gorgeous penthouse hotel suite.

Suddenly the Strip’s most exclusive clubs are all-access, and with an unlimited credit card each, it should be easier than ever to fit right in. But in a town full of secrets and illusion, fitting in is nothing compared to finding out the truth about their past.

“What happens in Vegas Stays in Vegas … but that doesn’t matter when you live there.”

The fireworks started before either of them could say anything more, bursts of light shooting into the desert sky, bigger than any firework show Courtney had seen in Fairfield. It was impossible to ignore the electricity bouncing between the inches of space separating her and Brett, dancing across her skin with each boom overhead. She couldn’t stop glancing at him from the corner of her eye. He looked lost in thought, although sometimes she swore she caught him watching her, too. This went on for twenty minutes, and then came the finale—shot after shot of fireworks exploding, without a second’s break between them. Some sored into their air like comets and others spread like meteor showers, filling up miles of sky.
When it was over, Courtney was sitting so close to Brett that their arms were an inch from touching.
“How did you like it?” he asked, not making an effort to move away.
“I loved it,” she replied. “Thanks for bringing me.”
Her head felt fuzzy, and she pushed a strand of hair behind her ear, her arm brushing his. She stilled at the touch, and he looked at her with more intensity than he had the entire night.
“Are you two ready to leave?” Dawn destroyed the moment, standing up and brushing invisible dust off her jeans.
Courtney jerked backward, torn out of her trance. If the others hadn’t been there, what would have happened between her and Brett? She’d never kissed a guy before, but from the way he was looking at her, she felt like he’d wanted to kiss her. And if he had, she wasn’t sure she would have stopped him.
She shook her head at the thought. Courtney had never broken a rule in her life.
Whatever had just occurred between her and Brett could never happen again.

Praise:
“Sexy and often electrifying … Gossip Girl meets The Princess Diaries in a city that never sleeps.”
–Booklist
“This quick and entertaining read is filled with glitz and glamour … get ready for one crazy and fabulous ride.” –RT Book Reviews
Book Two: 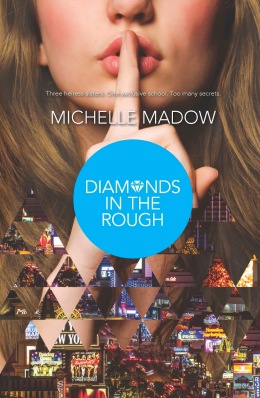 Diamonds in the Rough (The Secret Diamond Sisters #2)
by Michelle Madow
Release Date: 10/28/14
Harlequin Teen
448
Summary from Goodreads:
All-access doesn’t mean no problems.The three Diamond sisters survived the summer in style after coming to live with their long-lost billionaire father. But making a place for themselves at their exclusive new Las Vegas private school is throwing them any number of gold-plated curves. Savannah’s YouTube stardom turns into a Sweet Sixteen reality show extravaganza—with complimentary enemies on the side. Dangerous flirtations don’t keep Peyton from a gamble that will risk far more than she planned to bet. And when Courtney and the sisters’ archenemy, Madison, uncover two explosive secrets, it will rock even this town of glittering illusion—and turn their lives upside down all over again.Sisterhood, first crushes, and scandalous secrets explode in book two of Michelle Madow’s riveting series, The Secret Diamond Sisters.

Michelle Madow was inspired to write The Secret Diamond Sisters series while walking through her favorite hotel in Las Vegas. The next book in the series, Diamonds in the Rough, launches in October. Prior to The Secret Diamond Sisters, she successfully self-published The Transcend Time Saga. A tireless promoter of her work, Michelle is active on social media networks and has toured across America to promote her books and encourage high school students to embrace reading and writing. A graduate of Rollins College, Michelle lives in Florida … but she loves going to Vegas.
To chat with Michelle and other fans about her books, joinMichelle Madow’s Street Team on Facebook!