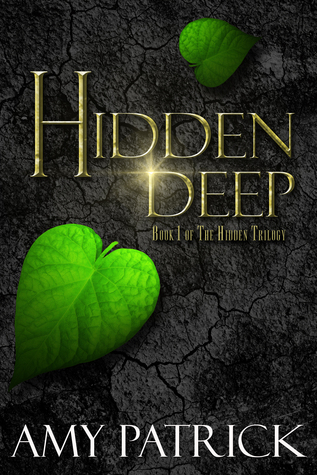 Summary from Goodreads:
Give in to the Glamour…

Sixteen-year-old Ryann Carroll has just run into the guy who saved her life ten years ago. You might think she’d be happy to see him again. Not exactly. She’s a bit underdressed (as in skinny-dipping) and he’s not supposed to exist.

After her father’s affair, all Ryann wants is to escape the family implosion fallout and find a little peace. She also wouldn’t mind a first date that didn’t suck, but she’s determined not to end up like her mom: vulnerable, betrayed, destroyed. Ryann’s recently moved back to her childhood home in rural Mississippi, the same place where ten years earlier she became lost in the woods overnight and nearly died.

She’s still irresistibly drawn to those woods. There she encounters the boy who kept her from freezing to death that long ago winter night and was nowhere to be seen when rescuers arrived. He’s still mysterious, but now all grown-up and gorgeous, too. And the more she’s with him, the greater the threat he poses to Ryann’s strict policy– never want someone more than he wants you.

Seventeen-year-old Lad knows the law of his people all too well: Don’t get careless and Don’t get caught. It’s allowed his race to live undetected in this world for thousands of years, mentioned only in flawed and fading folklore…

Lad’s never been able to forget about Ryann since that night ten years ago. When he sees her again, his fascination re-ignites and becomes a growing desire that tempts him to break all the rules. He’s not even supposed to talk to a human, much less fall in love with one.

And the timing is atrocious. The Assemblage is coming, the rift between the Light and Dark is widening, and mysterious celebrity fan pods are becoming more and more widespread and influential. Lad may have to trade his own chance at happiness to keep the humans, especially Ryann, blissfully unaware and safe.

I really liked this book and I loved the two main characters, Ryann and Lad.  Ryann has just returned to her Grandmother’s rural Mississippi home.  She loves hiking in the woods and comes upon a nice little pond.  It is so hot that she can’t resist taking a dip.  She doesn’t actually go skinny dipping.  She leaves on her bra and underwear, just in case someone should happen to come along.  She dunks herself under the water and when she comes up there is a very gorgeous boy watching her.  This is how Ryann and Lad meet for the first time or so Ryann thinks, but they have met before.  Ten years ago he saved her life when she was lost in the woods.  Although her family never believed her about the boy who helped her and over the years she convinced herself that he wasn’t real.  Now that they have met again, they are irresistibly drawn to each other.

Ryann has had a lot of recent turmoil in her life.  Her parents are divorcing and she and her mother have moved back in with her grandmother.  She loves being back at her grandmother’s house.  She is finishing her junior year in high school and has already made some good friends.  After what happened to her mother, boys are not really on her radar.  Her mother always tells her to go after her dreams and just let a man be icing on the cake.  She doesn’t want Ryann to make the same mistake that she did. to make a man the center of your world and then have them leave you.  Ryann has no trouble obeying her mother until she meets Lad.  She just can’t resist sneaking into the woods to see him and he quickly becomes very important to her.

Lad has been dreaming of Ryann since he saved her life in the woods ten years ago.  He hasn’t been able to forget her and no other girl can compare.  He is not allowed to become involved with humans or the human world, but how can he resist when Ryann has returned?  She is everything that he hoped she would be, but would she still like him if she knew what he was?

There were a few places in the book that dragged a little.  It wasn’t bad enough to make me stop reading, but I would have liked to have a little more action.  The love story was a little cheesy at times, but not as bad as some books I have read.  This story contains  a few secrets and Ryann never figures any of them out.  She is oblivious to all of the clues.  I would have liked to see her at least suspect some of the truths that were coming her way.

Ryann and Lad are great characters and their love story is very cute.  This book is very clean.  There is only some kissing.  I was a little worried when I read the synopsis, but my worry was for nothing.  The story is well written.   I really liked the idea for this book and the two different worlds that are shown.  I liked the interaction between Ryann and her family and Lad and his family.  There are a lot of secrets in this book and I can’t tell you anything about them.  It would totally ruin the story for you.  I adore Ryann’s grandmother.  She is awesome.

The sequel to Hidden Deep, Hidden Heart, comes out at the end of May and I will have to read it.  I really want to know what happens to Ryann, Lad, and both the worlds they live in.  I give this book four stars and I would recommend it to those who like a good clean love story with some paranormal activity added in to the mix.

About the Author
Amy is a two-time Golden Heart finalist (2013 and 2014). She lives in Rhode Island with her husband and two sons and actually craves the heat and humidity of Mississippi, where she grew up. She’s been a professional singer and news anchor and currently narrates audio books as well as working as a station host for a Boston TV station.