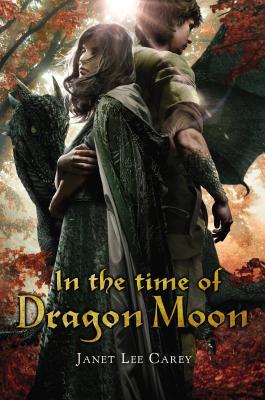 In the Time of Dragon Moon (Wilde Island Chronicles #3)

An epic fantasy about dragons, dark secrets, Pendragons, and magic

On the southernmost tip of Wilde Island–far from the Dragonswood sanctuary and the Pendragon Castle–live the native Euit people. Uma, who is half Euit and half English, and not fully accepted by her tribe, wants to become a healer like her Euit father. But the mad English queen in the north, desperate for another child, kidnaps Uma and her father and demands that he cure her barrenness. After her father dies, Uma must ensure that the queen is with child by the time of the Dragon Moon, or be burned at the stake.
Terrified and alone, Uma reaches out to her only possible ally: the king’s nephew Jackrun, a fiery dragonrider with dragon, fairy, and human blood. Together, they must navigate through a sea of untold secrets, unveil a dark plot spawned long ago in Dragonswood, and find a way to accept all the elements–Euit, English, dragon, and fairy–that make them who they are.

Jackrun’s eyes fell on my double-belted waist. I’d put on Father’s belt–missing Mother, missing Father, feeling alone on this strange new island full of English—and forgotten to take it off.

Jackrun began pacing the bluff, keeping his path small, as if the grass caged him. “Just give me your promise.”

Never trust the English, Father said. I could not make promises so easily anymore. I needed to gather information as sure coin to use if I needed it. “I know some warriors in my tribe who would love to have such power.”

He barked a short, bitter laugh. “You don’t know what you’re saying, Uma.” His feet moved, his arms, his hands. “I have to get back,” he added, glancing toward the castle.

“And I have firewood to gather,” I said. You are the fox. They are the hounds. You must learn to survive.

“I’ll give you a hand,” he said. We headed down the hill. Summer stars winked above, a treasury of diamonds. On the beach I slipped off my shoes and felt the sand between my toes as Jackrun rolled up his sleeves, fell to his knees, and dug a hole with his bare hands to bury the dead bird he’d burned. When he was done, he patted the small mound with care as if he were tucking in a child.

He stood tall again, brushing off his hands. Green dragon scales covered his right forearm, each diamond-shaped scale the size of a coin. “I nearly burned Desmond tonight over that,” he said, looking down at his scaly arm. “Not my scales, but my sister’s. He insulted Tabitha. He called her neck scales repulsive. He said it in the middle of the feast, loud enough for everyone to hear. Tabby ran from the table in tears.” He swiped a hand through his hair, a swift, hard pass as a man skins an animal with a sharp blade. “He’s the same callus bastard he’s always been.”

Jackrun was on the move again, this time walking to the shore. Water hissed up to our feet, touched his boots and my bare toes. I pointed across the sea at the dragon flying under the stars, black as a torn piece of night. It might be Jackrun’s dragon, Babak, or Lord Kahlil. Too far away to tell. Dragons combine earth, wind, and fire in their bodies. They have a power like the sun. Jackrun had this same life force in him.
“You are the only one who can do what they do with fire.”

Jackrun’s mouth tightened. He hooked his thumb around the jeweled dagger at his belt. “You don’t understand. It’s dangerous. I’m dangerous.”

“You didn’t harm Prince Desmond tonight,” I said. “You ran outside before you burned him.”

“He deserved to burn.” His body was rigid. He glared down at me. I kept his gaze.

“Yes. He does.” Had I spoken the words out loud? For a moment his fire had released me.

“Uma Quarteney.” Jackrun’s gaze softened. Then he crouched to fill his hands with seawater and rinse his face. Water ran down his cheeks and chin, his wrists and arm scales. He looked calmer when he stood again. “You remind me of someone,” he said. “Someone I lost years ago.”

I waited for him to explain, taking in his thoughtful mouth, the weight of sorrow around it. But he never told me who he was thinking of. We circled the beach, gathering firewood.

― Janet Lee Carey, In The Time Of Dragon Moon