The Viper and the Urchin
by Celine Jeanjean
Release Date: July 27th 2015

Being Damsport’s most elegant assassin is hard work. There’s tailoring to consider, devilish poisons to concoct, secret identities to maintain… But most importantly, Longinus has to keep his fear of blood hidden or his reputation will be ruined. So, when a scrawny urchin girl threatens to expose his phobia unless he teaches her swordsmanship, he has no choice but to comply.

It doesn’t take long for Rory to realise that her new trainer has more eccentricities than she has fleas. But she’ll put up with anything, no matter how frustrating, to become a swordswoman like her childhood hero.

What she’s not prepared for is a copycat assassin who seeks to replace Longinus, and who hires Rory’s old partner in crime to do away with her, as well. Rory and Longinus must set their differences aside and try to work together if they’re to stop the copycat. But darker forces than they realise are at play, and with time running out, the unlikely duo find themselves the last line of defence against a powerful enemy who seeks to bring Damsport to its knees.

The Viper and the Urchin Teaser:

Rory liked to imagine that catching and mounting a wild beast mid-flight would be a little like climbing on board Crazy Willy’s steamcoach. She kept her knees bent, hands at the ready, head turned to the right as she waited for it to arrive.

The noise grew louder: the mad clatter of wheels, the rattle of the coach, the whine of springs, the grating of metal on metal — and just audible over the commotion, Crazy Willy’s crazy laughter.

It appeared like something out of a nightmare, screeching around the corner, the metal wheels sending sprays of sparks on either side. Two wheels lifted from the ground, tilting the whole coach sideways, and Crazy Willy laughed louder. He turned the steering wheel slightly and the coach crashed back to the pavement.

The steamcoach rushed towards Rory, huge and dark, bristling all over with metal rungs that gleamed in the moonlight. The engine’s chimney poured out smoke as thick as tar, and fire roared, glaring out of air holes like the burning eyes of a beast.

The Viper and the Urchin Excerpt:

Longinus sat at a corner table in the Hand and Tankard, surveying the room. He had swapped the black silks he wore as the Viper for simple leathers, the better to blend in with the crowd. He found it best to tone down his natural elegance when mixing with common folk. That said, he was unable to compromise on the cut of his clothes, and he had had his leathers tailored to within an inch of their lives. A shame that he was sitting down, really; they showed off his figure so exquisitely he should have stood at the bar, the better to be admired.

He listened to the talk around him, waiting for the gossip on the Viper’s exploits. He had spent the last few days locked away writing pamphlets about his most recent kill, and he had left them at the docks first thing that morning for a lucky few to find and read. He liked to think that his prose did more than inform the wider public of the Viper’s actions — it elevated their minds, too.

Which was why he was growing rapidly annoyed with the direction the conversations were taking: the weather, the upcoming Revels, and speculation as to whether the Old Girl, the Marchioness of Damsport, was going to pass the torch to her daughter. All of it without interest. It was incredible what mundane banalities the small-minded could find interesting.

Unfortunately, he had to rely on them to spread his reputation about town. His notoriety was improving, but it was nowhere near what it ought to be. The guards always tried to hush his activities, so he had to help things along by distributing his pamphlets. Notoriety helped him get commissions, but most importantly, one could only be an artist if one was spoken of. There was nothing worse for an assassin than obscurity.

At last, a woman he knew by sight on account of her starched white apron arrived. Mistress White Apron sat down and regarded the others around her table with the kind of smugness particular to a woman about to unveil a fresh piece of gossip.

“Have you heard the latest on the Smallport killing?”

At last! Longinus smiled. Mistress White Apron could always be counted on. Maybe he should find out where she lived and distribute his pamphlets directly to her door.

“Yeah, I hear it were that Viper character again,” said a sailor.

“Everyone knows that,” said the woman with contempt. “He leaves a card behind. But have you heard the particulars? Hmm?” She looked at the faces of her audience, so puffed up with self-satisfaction she almost seemed to be expanding. Longinus beamed. The saintly woman was about to unveil his new poison.

Mistress White Apron leaned forward. “I have it on good authority that he skinned his victim. Slipped the skin right off, like you do with a rabbit.”

Longinus almost fell off his stool. Skinned? Skinned? Had that idiot even read his pamphlet?

What is the point of me writing them if these simpletons blithely ignore them?

“Oh really? I heard it were poison,” said another woman.

“Not this time,” said Mistress White Apron. “I heard it from my cousin’s sister-in-law’s nephew. He works with the guards.” She lowered her voice. “I hear the Viper even drinks the blood of his victims, like a vampire.”

Longinus felt himself go green at the thought.

Ridiculous, this is ridiculous…

But there was nothing ridiculous about the image that was now firmly imprinted in his mind.

“You’re making it up,” said the sailor, obviously disgusted.

“I am not,” sniffed Mistress White Apron. “Just because you can’t handle —”

“If I might interrupt,” said a small pinched man at a table next to them. “I saw the body myself and…”

Longinus couldn’t listen to any more. The butchery of his art was almost as unbearable as the thought of the Viper drinking blood. He fumbled into his purse and produced two coins, which he threw on the counter before hurrying out.

The propensity of the common man’s mind to turn to the violent and bloody really was intolerable. 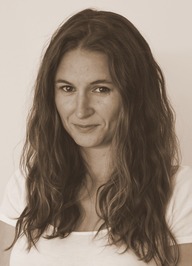 Celine Jeanjean is French, grew up in the UK and now lives in Hong Kong. That makes her a tad confused about where she is from. During her time in Asia she’s watched the sun rise over Angkor Wat, lost her shoes in Vietnam, and fallen off a bamboo raft in China. Celine writes stories that feature quirky characters and misfits, and her books are a mixture of steampunk, fantasy and humour.