H.A.L.F. 9 has taken his first breath of desert air and his first steps in the human world. Created to be a weapon, he proved too powerful for his makers and has lived a sedated life hidden from humans. But H.A.L.F. 9 has escaped the underground lab he called home, and the sedation has worn off. He has never been more alive. More powerful. Or more deadly.

Erika Holt longs to ride her motorcycle east until pavement meets shore. She bides her time until graduation when she’ll say adios to the trailer she shares with her alcoholic mother and memories of her dead father. But a typical night in the desert with friends thrusts Erika into a situation more dangerous than she ever imagined.

Circumstances push the two together, and each must make a fateful choice. Will Erika help H.A.L.F. 9 despite her “don’t get involved” rule? And will H.A.L.F. 9 let Erika live even though he was trained to kill?

The two may need to forget their rules and training and if either is to survive the dangers of the deep beneath them. 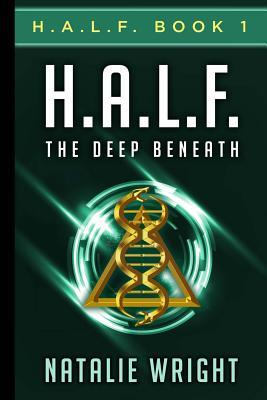 Purchase Links:
Amazon |B&N
Book Excerpt:
Be Careful What You Wish ForErika didn’t want to see her two best friends killed. She closed her eyes tightly while she prayed for a miracle. She would have closed her ears too if she could. Erika waited to hear the gun blast, but it didn’t come. Instead, there was only a loud thud as if someone had fallen to the earth.She opened her eyes. Ian stood a few feet away, his hair mussed, eyes wide and brows drawn together. Joe still held her tightly, but Nacho lay on the ground. If Jack was down and neither Ian, Erika nor Joe had shot Nacho, then why was he lying in a heap on the desert floor?Joe loosened his grip on her. Erika’s wrists were now free but throbbed where Joe had pinched and twisted them. She spun around and backed away from him. Joe’s hands were at his neck, his eyes bulging. His body jerked and he grasped at his throat as if he were trying to pull at a rope or cord. But there was nothing around his neck.

Is he having a seizure or something?

Ian looked as baffled as she was. No one touched Joe, yet he appeared to battle against someone choking him. Erika didn’t know who or what had a grip on Joe, but there were already two bodies on the ground. She didn’t want to see another.

“Stop!” she screamed. As vile as Joe was, she’d get more satisfaction from seeing him rot in jail than die.

Joe panted for air as he fell to the ground. Though he no longer tore at his neck, he didn’t seem to be able to get up. He strained with an effort to rise, but he stayed down.

“Look, whoever you are, don’t kill him,” Erika said.

“Why the hell not?” Ian screamed. “They shot Jack. He was going to rape you and traffic you across the border. He deserves to die.”

“No one deserves to die.” Erika didn’t wait for Ian to counter argue. She searched the ground for Jack as best she could in the dim light. Ian did the same.

Erika ran to the place where Ian stood. She knelt beside Jack’s motionless body laying face down. She turned him over and felt his neck. There was a pulse. Thank God, Jack’s alive. Her eyes roved over Jack’s body as her hands felt for a wound. “He was shot in the left shoulder.” Her hands were wet with his blood.

“Alive? Yes. But there’s a lot of blood.” Erika held up her hand for Ian to see. The smell of the sticky liquid brought a wave of nausea. “Help me get him up. We’ve got to get him to the car and – ”

A rustling sound in the brush interrupted their conversation. Erika turned in the direction of the noise and a shadowy figure emerged from the weeds. Her hands and legs had almost stopped shaking, but the appearance of yet another stranger, intentions unknown, caused her to quake again. 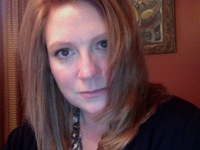 Natalie is the author of H.A.L.F., a young adult science fiction series, and The Akasha Chronicles, a young adult fantasy trilogy. She lives in the high desert of Tucson, Arizona with her husband, tween daughter, and two young cats.

Natalie spends her time writing, reading, gaming, geeking out over nerd culture and cool science, hanging out on social media, and meeting readers and fans at festivals and comic cons throughout the western United States. She likes to walk in the desert, snorkel in warm waters, travel, and share excellent food and conversation with awesome people. She was raised an Ohio farm girl, lives in the desert Southwest, and dreams of living in a big city high rise