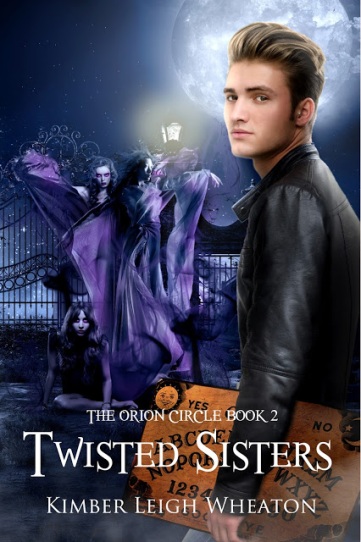 While playing with a spirit board, two sorority sisters summon the vindictive spirits of three women brutally murdered by a psychopath. Join Logan, Kacie, and the rest of the Orion Circle as they delve into the disturbing events of the past to find the key to freeing the spirits.

But this isn’t any ordinary haunting.  These ghosts were banished before, and now they have returned more powerful than anyone could have imagined. Anger breeds hatred and hatred leads to darkness—these phantoms are on the verge of losing their last spark of humanity and becoming completely lost to the shadows.

Can Logan and Kacie convince the tortured souls to embrace the light and move on, or will the spirits succumb to the hypnotic pull of evil, leading to an eternity of torment and suffering?

That’s it. I can’t wait for Raven any longer. Mr. Kincaid’s voice echoes in my ears, calling me stupid for rushing in not knowing what’s in there. I’m in charge of this fiasco… I never should’ve let her run in without more information. Steeling my shoulders, I cross the threshold into the house.

I stop and survey the scene in seconds, taking in the ridiculous amount of damage. The living room is trashed: sofa overturned, lamps broken on the floor, and the front window shattered by the flying armchair. No sign of Raven, but the girls said they were using the board in the kitchen. As I walk down the hall toward the back of the house, a ceramic figurine flies at me. I duck just in time as it grazes the top of my hair. I’m finding it difficult to believe spirits summoned from a spirit board by amateurs could be this powerful.

The family room is in a similar state to the living room. When I spy the sixty-inch TV on the floor in a smashed mess my heart thumps faster. These are powerful spirits or maybe even a rogue gang. That TV had to weigh over one hundred pounds, and it’s a good twelve feet from the entertainment center. No sign of Raven in here either.

A fierce wind blows from the kitchen, slamming me against the wall. So much power. None of this makes any sense!

“Raven.” I try to call out, but my voice comes out a hoarse croak.

My body is freed as the wind dies down, and I race toward the kitchen. Something shoves me from behind, sending me reeling across the tile floor. I manage to rotate myself at the last second so my shoulder impacts the wall instead of my head. The wind stops the moment I hit the wall. As I rub my sore shoulder, a loud scream pierces the silence. My stomach drops at the sheer terror echoing in that scream. Raven.

Leaping to my feet, I search the large kitchen for her. When my eyes land on her, I blink a few too many times. This shouldn’t be possible.

“Hang on, Raven,” I call out to her form suspended in midair near the ceiling.

“Hang on? Really?” Her arms are splayed out to the sides. Though she tries to project confidence with her words, I can tell from her face that she’s terrified.

“Release her at once!” I yell at the invisible spirits. “She has done nothing to you.”

“Don’t you think I already tried that?” Raven bites out in between gasping breaths.

“St. Michael, the archangel, def—” I start the prayer, but something crashes into me, knocking the wind from my lungs as I’m slammed into the floor. It takes a few dazed seconds to realize it’s Raven’s body crushing me. “Can you move?”

“I don’t know.” She rolls off me despite her words, groaning. “Those damned spirits. Madder than cornered rattlesnakes.”

“I can’t feel anything but intense hatred and fury.” I push to my feet, ignoring the searing pain in my side. After hauling Raven up by the arm, I drag her toward the back door.

“Wait!” she yells, yanking her arm away. “The board.” Raven disappears beneath the long oak table. A few seconds later, she pops out holding the spirit board.

“Come on,” I shout when I feel the spirits returning for round two. “Crap, too late.” An invisible force plows into me, pushing me back into the unforgiving wall. “Raven, run!”

Something hits me in the ribs, banging my body into the wall once, twice, three times. My head spins from the impact. At least Raven made it out. A white mist fills my vision, and I blink several times. It doesn’t go away, only becomes sharper, more focused. Her form is wispy, ethereal. She would be beautiful were her lips not turned into a vicious sneer. I lay on the ground, waiting for her to make her move while she floats around me.

Kimber Leigh Wheaton is a bestselling YA author with a soft spot for sweet romance. In addition to writing, she works as an editor for two publishers as well as select indie authors. She is married to her soul mate, has a teenage son, and shares her home with three dogs and lots of dragons. Kimber Leigh is addicted to romance, video games, superheroes, villains, and chocolate—not necessarily in that order. (If she has to choose, she’ll take a chocolate covered superhero!) Winner of the 2014 Rising Star Award at the BTS Red Carpet Awards in NOLA.