In 2013 the Earthbound Series kicked off, introducing Tavia and her amazing abilities to the world. Now that the last book in the series is here, it’s a great time to start if you haven’t already – and with the release of EARTHRISE we bring you the chance to WIN the whole set!

Nothing is better than no wait time in between books! The super charged, heart-pounding Young Adult Fantasy series will have you on the edge of your seat! 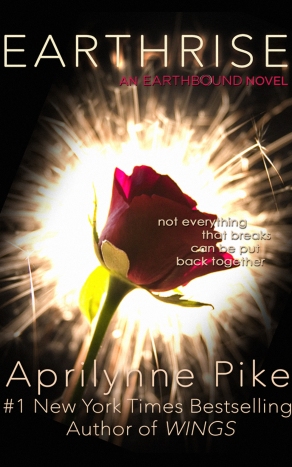 Even with the power to create and destroy at will, Tavia Michaels couldn’t save her parents. She couldn’t save the boy she’s loved for countless lifetimes. She barely managed to save herself from the treachery of supposed friends. So how can she save the world from a deadly plague–and the immortals spreading it? As the events of EARTHBOUND and EARTHQUAKE reach their thrilling conclusion, no one is safe–Tavia least of all!

Critically acclaimed, #1 New York Times best-selling author Aprilynne Pike has been spinning tales since she was a child with a hyper-active imagination. At the age of twenty she received her BA in Creative Writing from Lewis-Clark State College in Lewiston, Idaho. When not writing, Aprilynne can usually be found out running; she also enjoys singing, acting, reading, and working with pregnant moms as a childbirth educator and doula. Aprilynne lives in Arizona with her husband and four kids; she is enjoying the sunshine.

INFO ON OTHER BOOKS IN SERIES

Tavia Michaels is the sole survivor of the plane crash that killed her parents. When she starts to see strange visions of a boy she’s never spoken with in real life, she begins to suspect that there’s much about her past that she isn’t being told.

Tavia immediately searches for answers, desperate to determine why she feels so drawn to a boy she hardly knows. But when Tavia discovers that the aunt and uncle who took her in after her parents’ death may have actually been responsible for the plane crash that killed them – and that she may have been the true intended victim – she flees for the safety of Camden, Maine, where the boy she sees in her visions instructs her to go.

Now, Tavia is on the run with no one to trust. No one, that is, except for her best friend and longtime crush, Benson.

Tavia feels torn between the boy who mysteriously comes to her at night and the boy who has been by her side every step of the way. But what Tavia doesn’t know is that the world is literally falling apart and that to save it she will have to unite with the boy in her visions. Only problem? To do so would mean rejecting Benson’s love. And that’s the one thing Tavia Michaels swore she’d never do.

Tavia Michaels has discovered that she’s an Earthbound—a fallen goddess with the power to remake the Earth—and that a rival faction of Earthbounds, the Reduciata, has created a virus that is literally wiping swaths of the planet out of existence.

Tavia is captured and imprisoned before she can act on this information, along with her eternal lover, Logan. Huddled in a claustrophobic cell, they lose track of the days, their attempts to escape proving as ephemeral as Tavia’s newly gestating powers. But then Tavia and Logan are mysteriously rescued. . . .

They’re brought to the underground headquarters of the Curatoria, another group of Earthbounds that Tavia doesn’t fully trust. There, she’s told that she can save the Earth before it disappears. She agrees.

Tavia quickly realizes that she isn’t like other Earthbound, and as her abilities continue to awaken, they begin to threaten her centuries-long relationship with Logan. When Benson—Tavia’s former best friend and romantic interest—appears at Curatoria headquarters, Tavia will again have to make a choice about who to be with even as she tries to stop the virus that is destroying the world and uncover the truth about the two Earthbound organizations that have her tangled up in their webs.

– One winner will get a full set of signed books in the EARTHBOUND series from Aprilynne Pike. (Books are a combo of HC and PB due to how they were released)
– Four winners will each get a signed paperback of EARTHBOUND

Must be 13+ To Enter |Open internationally | Please see terms and conditions for full contest rules.