We are so excited to be a part of the Minotaur Blog Tour! Be sure to check out an exclusive excerpt and giveaway below!

“Where shall I start?” asked Minotaur.

Ovid made an expansive gesture with both hands. “Where else but the beginning of course.”

Minotaur nodded his huge head. “Yes,” he said. “Yes,” his eyes already glazing over with the weight of thousand year old memories. And then he began.

So begins the story of Asterion, later known as Minotaur, the supposed half bull creature of Greek legend. Recorded by the famous Roman poet, Ovid, Asterion tells of his boyhood in Crete under the cruel hand of his stepfather Minos, his adventures with his friend, Theseus, and his growing love for the beautiful Phaedra.And of course what really happened in the labyrinth.

This is the true story of the Minotaur. 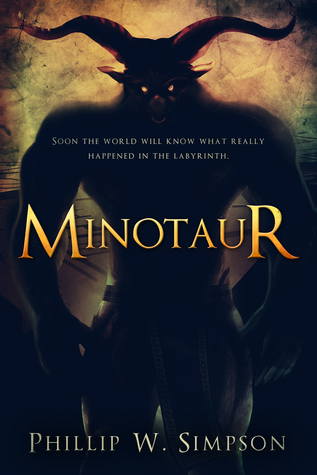 When I say love, we were young, and it was largely innocent—kissing, caressing, and the like. Still heady stuff for a young man, so of course I tried to lure Phaedra away from the palace at any opportunity.

Sometimes, we would lie sheltered from the sun amongst the cyprus and oak trees, talking, kissing, and doing what other young couples in love did. They were probably the best times of my life.

On one such occasion, Phaedra and I had taken some food and a little wine I’d stolen from the kitchen and wrapped up in cloth. We set it down in a clearing amongst the trees and ate and drank our fill. I confess I’d probably drunk more wine than was good for me and was feeling more than a little bold.

We kissed. Reluctantly, I broke the embrace to ask a question that had been plaguing me.

Phaedra looked at me askance, her head tilting slightly to show the perfection of her jawline. I desperately wanted to kiss her again.

“Do you really need to ask such questions?” she replied, her face serious.

“Asterion, you of all people should know I don’t judge based on appearances. To me, you are the most handsome man in the world because of who you are. You are gentle and have a kind soul. That’s more important to me than looks. Besides,” she said, with a twinkle in her eye, “you have big muscles. Every girl likes big muscles.”

“Is that all I am to you? A slab of meat?” I tried to joke, but my tone was all wrong. I knew I half meant what I said. I was only too conscious of my massive size and, like my horns, knew it marked me as an oddity or a strange freak of nature.

Phaedra slapped me playfully. “Most of the time. Sometimes you’re able to string a sentence together that is almost intelligent.”

Phillip W. Simpson is the author of many novels, chapter books and other stories for children. His publishers include Macmillan, Penguin, Pearson, Cengage, Raintree and Oxford University Press. He received both his undergraduate degree in Ancient History and Archaeology and his Masters (Hons) degree in Archaeology from the University of Auckland. Before embarking on his writing career, he joined the army as an officer cadet, owned a comic shop and worked in recruitment in both the UK and Australia. His first young adult novel, Rapture (Rapture Trilogy #1), was shortlisted for the Sir Julius Vogel Awards for best Youth novel in 2012. He is represented by Vicki Marsdon at Wordlink literary agency. When not writing, he works as a school teacher.