There are descendants of angels walking among us. Ember is one of them.

Embers is an epic paranormal adventure/romance about a seventeen year old girl who discovers that she’s immune to fire and any other injury when she’s in a horrific car crash that kills her parents. Following a violent episode with her aunt’s boyfriend, Ember flees Ohio to live with an old relative in the Smoky Mountains of Tennessee. Ember’s exuberance at escaping a bad home life soon turns to trepidation when she learns that she’s a Watcher, a descendant of angels.

While Ember is instructed about her heritage and the powers that go along with it, she strikes up friendships with two teenagers who live in a frightening walled compound in the forest. Inexplicitly drawn to one of the young men in particular, an impossible romance develops. But it’s cut short when Ember discovers that her new friends are fighting on the opposite side of a war that’s been raging between two factions of Watchers for thousands of years. When the compound’s inhabitants threaten the townspeople, Ember takes action, sealing her fate in the ancient battle of good versus evil, and the grayness in between. Ember is up to the challenge, until she realizes that she isn’t only fighting for the lives of the locals and the souls of her new friends. She may be one of the few champions willing to make a stand for all of mankind as the rapture approaches and the end of days begin.

Embers is the first novel in the dark and gritty YA paranormal romance series, The Wings of War. 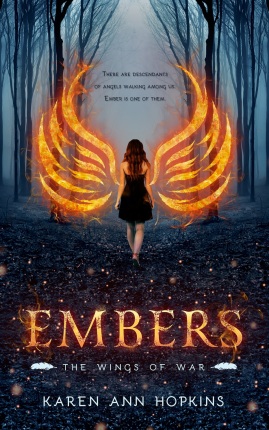 Ivan spoke with an excited voice. “Do you hear it, Ember?”

I tilted my head and listened. It was faint, but there was a low rumble in the distance. As we walked forward the sound grew.

He nodded his head. “We’re almost there.”

Soon the noise was a deafening roar, vibrating in my ears. When we stepped out of the cover of the trees, I was astonished. Raven Branch Falls was much larger than I expected. The water dropped from nearly seventy feet into a dark pool. Giant boulders jutted out below the pool to create smaller falls, which led into a rapidly flowing rocky creek bed.

My gaze was drawn to a tree leaning out from the side of the falls where a large grey owl was partially hidden in the foliage. There was something familiar about its eyes, and the way it was looking at me gave me the distinct feeling that I knew the bird. Could it be the same owl I saw racing through the air the day of my arrival?

Ivan grasped my arm and tugged me closer to the falls. He held my arm tightly as we stepped onto the boulders beside the deep water hole. Spots on the enormous rocks were wet and slippery from the spray of the falls and I was grateful for his help. He led me out to the farthest point we could go, where a carpet of soft moss blanketed the surface of a particularly large boulder. Ivan gestured for me to sit, which I did, and then he bounded off, climbing along the boulders until he was a little ways downstream.

I watched him go, thinking what a nice boy—or wolf, he was.

Without looking, I knew Sawyer was behind me. The movements of my stomach and heart gave him away.  He sat down very close.

“Where did you come from?” he coaxed softly.

For a second I saw the boy from my dream.

The breath caught in my throat. I gazed at him.

He doesn’t seem evil to me.

Watchers and Angels are at war. Which side will Ember choose?

Humankind is on the precipice of the apocalypse.

As the Demons grow bolder and the walls between the planes of existence weaken, Ember is forced to develop her powers as quickly as possible, and she seeks out a powerful earth Watcher to continue her supernatural lessons. Her glimpse of the future demands she fight the dark forces spreading across the earth.

But her new mentor has his own agenda, making her question everyone and everything she ever trusted.

When Ember is thrust into the world of the Watchers, she learns of their plans—ones that defy the scripture and make them enemies of the Celestial Host. Ridding the world of evil gets complicated when it becomes impossible to take sides.

As Ember struggles with morality, she soon discovers that there’s something more frightening than anything she’s faced before.

Ember must stop the apocalypse from happening, but at what cost?

The Angels of destruction have arrived, and only Ember stands in the way of their mission to carry out God’s wrath and annihilate His enemies.

When the barrier between celestial creatures and humans beings is broken and Angels descend to Earth, Ember soon learns there’s a fine line between good and evil. As she faces a world full of monsters and magic, a terrifying darkness rises and threatens to destroy everything she’s fighting for.

In the riveting third installment of The Wings of War series, Ember and her friends embark on an epic journey, where unlikely allies are forged and age-old beliefs crumble to dust. And just when Ember accepts love in her life, it’s ripped away from her in the most terrifying way possible. 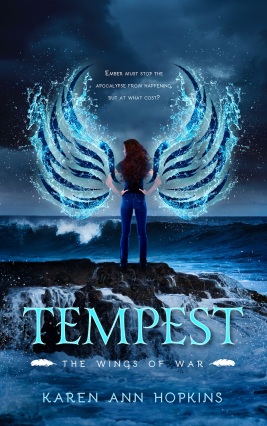 Purchase:
(Embers will be 99c during the blitz!)
Amazon

Where/how did you come up with the idea for your story? Did it suddenly pop into your head or were you brainstorming?

Embers was a daydream of mine for many years before I wrote the story. It wasn’t until after I published the Temptation series was published with Harlequin Teen that I felt confident enough to make it real.

Did you start with the main character, the world or the overarching concept?

I envisioned creatures and people with unusual powers living in the secluded mountains of eastern Tennessee. The forest, rugged terrain and mountain people set the stage for the rest of the story.

Panster or Plotter? Or in between?

I’m more in between. It’s important to think a story out thoroughly before diving in and I do that by picturing the scenes running through my mind as if they were on a movie screen. I take notes and set up a basic timeline before I begin writing. The process of preparation might take a month or many months of having the story floating around in my mind before I’m ready to commit to it to the page. Once I get started, I don’t stop to edit or revise. I continue writing with a stream of consciousness until the book is finished. Then I go back and fix the mistakes and any issues that popped up along the way. Too many writers get stuck on a certain page, trying for perfection early on. I’ve found that once you get further into the story, it begins to tell itself and the flow is smoother and steadier.

Are you a fan of writing contests?

I’ve never entered one, so I guess not. 😉

How did you find your agent? How many query letters did you send?

My first novel, Temptation, was rejected about thirty times before I was finally offered representation by Christina Hogrebe of the Jane Rotrosen Agency in New York. But to be fair to the first agents I submitted the story to, the manuscript evolved through the process, getting much better along the way. It was eventually worthy of representation by the time it reached Christina. Many of the agents who rejected it offered me sound advice, which I took. I incorporated their suggestions into the story, making changes and revising until it was in great shape. I always had a unique story. It just needed work to make it marketable.

Bookbub. Definitely. I’ve been lucky enough to land two promotions with the company, one for Lamb to the Slaughter and the other for Embers. These sales resulted in tens of thousands of purchases and downloads of my books. My fan base grew, as did my online review numbers, and my placement in the rankings rose. No other promotion or marketing strategy I’ve done has come close to a Bookbub promotion.

Ember is a strong young woman who is kind, loyal and loves animals. These are all traits that I admire.

What do you like best about your main antagonist?

In Embers, the antagonists were Garrett and his demon followers. They were pretty scary characters and I was satisfied that they were great representatives for the evil rising up in the world. In Gaia, I like that it’s more a question of WHO are the antagonists in the story.

Anything else you like to share about your journey or your upcoming launch, including links to giveaways or ways people can help spread the word?

The Wings of War is an epic young adult fantasy/paranormal that I believe readers of all ages will enjoy. I ask that fans let their friends know about it, and it greatly helps the cause when you post your honest ratings/reviews on Amazon. This is the most important place to give a shout out for your favorite stories and authors.

I love to connect with readers on Facebook, Twitter, Instagram or at http://www.karenannhopkins.com. Please be on the lookout for the release of ETERNITY, the fourth installment in the Wings of War series in December! Thanks for reading! 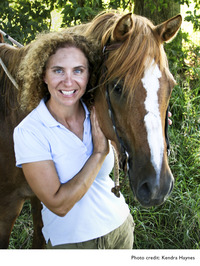 You can visit Karen Ann Hopkins at her website: www.karenannhopkins.com.

Karen Ann Hopkins resides in northern Kentucky with her family on a farm that boasts a menagerie of horses, goats, peacocks, chickens, ducks, rabbits, dogs and cats. Karen’s main job is home schooling the kids, but she finds time to give riding lessons, coach a youth equestrian drill team, and of course, write. She was inspired to create her first book, Temptation, by the Amish community she lived in. The experiential knowledge she gained through her interactions with her neighbors drove her to create the story of the star-crossed lovers, Rose and Noah.

Karen grew up about a mile from Lake Ontario in Upstate New York. She was bitten by the horse bug at the age of five, and after diligently taking riding lessons for several years, was rewarded with her first horse at the age of eleven. The feisty horse’s name was Lady, a Quarter Horse-Thoroughbred cross, who became Karen’s steadfast companion. Through the years, the constant force in her life was horses. Eventually, she found her place as a riding instructor herself. Before accepting her fate in the barnyard, she worked a short stint as a paralegal, traveled abroad, and guided tourists on horseback riding tours in the Smoky Mountains of Tennessee.

Karen is currently working on her Amish mystery series, Serenity’s Plain Secrets, along with the YA paranormal/fantasy series, The Wings of War, and the continuation of the Temptation series. Karen is also excited to announce the Temptation series has been optioned for TV by Pilgrim Studios and is available on Audible.

“I loved joining Rose and Noah during their journey in the Temptation series by Karen Hopkins.”-Katie McGarry, acclaimed YA author

5 thoughts on “Wings of War Book Blitz and Giveaway”