Even the hottest love can turn a girl cold-blooded…

Life’s tough for a vampire thief on the run—just ask Pandora Scott, she knows. Four years ago she ran away from home after everyone she loved betrayed her. But now her annoyingly grown up (and handsome) ex boyfriend is stalking her, begging her to return. A mysterious vamp with a particularly dangerous (and sexy) stare keeps popping unexpectedly into her life. The extremely powerful head vampire of New York is hunting her down because she may or may not have broken into his highly-secure, highly-secretive personal vault. And the fate she’s been trying to outrun? Well, it’s about to catch up. Because even a super-speedy vamp with the ability to disappear can’t escape her own destiny.

A brand new spinoff to Midnight Fire, a bestselling series with over 200,000 copies sold and over 5000 5-star reviews on Goodreads! Fans will enjoy special appearances from Kira, Luke and Tristan while falling in love with the new characters and new adventure of Midnight Ice.

*Please note, you do not need to read the books of Midnight Fire to enjoy Frost (Midnight Ice Book 1). They are two standalone series with character crossover. 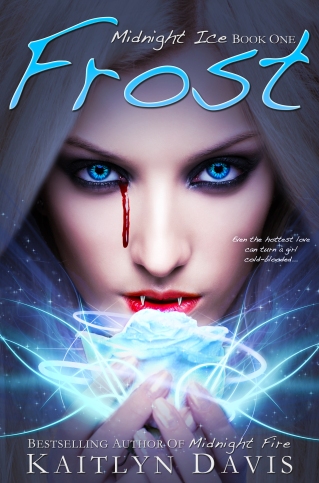 All she wanted to do now was forget. Forget Jax, forget everything he’d stirred up, forget her birthday. So, she downed another bloody cocktail, this time O-negative. And another after that. She let the feeding frenzy take over, let the high of fresh life wash through her.

And lost herself in the blood and the music and the touch of other cold bodies just like hers, searching for that little spark of life, reveling in it.

“You look good enough to eat,” a sultry voice whispered in her ear.

Pandora whipped around lightning fast, flashing her fangs. “I bite.”

The man smiled, lips practically dripping with sin. “Me too.”

Normally, this was when she’d punch and run. Seduction wasn’t really her thing. It just made her think of another boy and another time she’d never get back. But tonight was different. Tonight she wanted to be free. Tonight she was determined to move on, to move forward.

So she grinned back, taking the stranger in. And really, a girl could do worse, much worse. He was tall, broad, with bright golden hair that seemed almost aflame in the darkness of the club. His vampire-blue eyes were just as bright as hers, flashing with unabashed hunger, brazen want. His skin, though, was what really caught her eye. It was sun-kissed and bronzed, not pallid, not washed out by his ebony shirt. Somehow he looked almost warm to the touch.

Before she could stop herself, Pandora lifted her fingers, stretching for the triangle of hard skin at the base of his throat, exposed between two sets of open buttons.

He stepped swiftly to the side.

The darkness seemed to follow, wisps of ebony clinging to his frame, undulating with his every movement.

“Not yet,” he murmured, never once taking his eyes off her.

The longer he held her gaze, the more familiar it seemed to become, as though she’d seen those eyes before, as though this wasn’t the first time they had caressed her body.

His smile deepened, filling with secrets she could tell he had no intention of spilling. “Not like this.”

But he looked away without answering, sweeping his stare down to her lips, to every inch of exposed skin, lifting back to her throat, pausing there. She didn’t move. There was a dangerous sort of confidence about him, but against her will, she found it alluring, intriguing in a forbidden way. She’d always been drawn to things she wasn’t supposed to have. Usually, she took them anyway.

She reached out again, trying to touch him.

He moved deftly away, almost made of air as he circled behind her.

“Pandora,” he whispered into her ear, breath like a kiss against the soft skin of her neck, making her shiver.

And then the word he spoke registered.

He knew her name.

“How…?” She spun around, trailing off when she realized there was nothing there, no one there.

A ghostly finger brushed against her elbow, tracing a burning path up her arm. “You’re not the only one who knows how to disappear.”

But he was gone.

If you haven’t read the bestselling Midnight Fire series, you can get the first two books free when you buy the entire series at once!

When Kira Dawson moves to South Carolina, she meets Luke, a blond goofball who quickly becomes her best friend, and Tristan, a mysterious bad boy who sends shivers down her spine. Kira knows they’re keeping secrets, but when she discovers Tristan’s lust for blood and her own dormant mystical powers, Kira is forced to fight for her life and make the heartbreaking decision between the familiar comfort of friendship and the fiery passion of love.

From bestselling author Kaitlyn Davis comes a paranormal romance perfect for fans of Twilight, The Vampire Diaries, and Buffy The Vampire Slayer.

Books included in this bundle:

“The writing is effortlessly mind-blowing. I could not put this entire series down.”

– Happy Tales and Tails Blog
“Read the books. Do it.”

– Urban Girl Reader
“Some of the best action scenes I have come across in a young adult book.”

– Reflections of a Bookworm
“I was riveted throughout … there was drama, danger, action and romance that was wonderfully detailed and described.”

“You’ll make friends with Kira, choose sides with Tristan and Luke, and fall in love with the story at heart about a girl with so bright a future…even shades aren’t gonna cut it.”

Always blessed with an overactive imagination, Kaitlyn has been writing ever since she picked up her first crayon and is overjoyed to share her work with the world. When she’s not daydreaming, typing stories, or getting lost in fictional worlds, Kaitlyn can be found indulging in some puppy videos, watching a little too much television, or spending time with her family. If you have any questions for her–about her books, about scheduling an event, or just in general–you may contact her at: KaitlynDavisBooks@gmail.com

To stay up-to-date with all of Kaitlyn’s new releases, sign up for her new release newsletter here: TinyLetter.com/KaitlynDavisBooks

1 thought on “Frost Promo and Giveaway”