For most of her teenage life, CeCe Edmonds has been dealing with the stares and the not-so-polite whispers that follow her around Edgelake High. So she has a large scar on her face—Harry Potter had one on his forehead and people still liked him.

Bryn asks CeCe to help her compose messages that’ll charm Emmett. CeCe isn’t sure there’s anything in his head worth charming but agrees anyway—she’s a sucker for a good romance. Unfortunately, the more messages she sends and the more they run into each other, the more she realizes there’s plenty in his head, from food to literature. Too bad Emmett seems to be falling for the wrong girl… 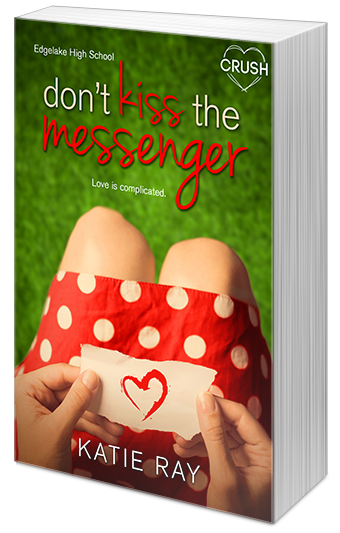 Bryn let herself in through the front door. I had been drowning my sorrows in hot chocolate and An Officer and a Gentlemen. I looked up as Bryn unzipped her coat.

“You broke up?” I tried not to sound hopeful.

“Worse.” She sighed and sat down next to me on the couch. “Emmett told me he loved me. Sober. To my face. Most guys at least text that kind of stuff.”

Her words hit my heart like arrows. I slumped deeper into the couch, aching from the blow. I had been disillusioned enough to think that one day he would confess those words to me.

Tuba walked in the room and one look at me was enough to catch her up on the conversation.

“He said these weeks were torture to be away from me,” Bryn complained. “He said he had to taste the words that come out of my mouth. He actually said that! What the hell, CeCe?”

Tuba looked over at me. “Looks like we have a budding Danielle Steele on our hands,” she said. Bryn just stared between us, completely missing the reference.

“It gets worse,” Bryn said. “He told me he first fell for me because I was beautiful, but then he said none of that even mattered anymore. That my thoughts are more beautiful than anything and that’s what he loves most about me.”

I looked up at Bryn.

She nodded. “That really pissed me off,” Bryn continued. “So I asked him what he would think if I was ugly and he told me he wouldn’t care.” She huffed and stuck her hands on her hips. “That is the biggest line of B.S. I have ever heard. Guys totally care about looks.”

Tuba nodded, slowly. “Yeah, but they care about other things, too.”

“Looks are most important,” Bryn shot back.

“But they’re not the only thing that’s important,” Tuba argued.

I was barely listening. Was it true? Did he really mean it? He loved her more for her mind than her looks? It didn’t take a rocket scientist to fill out the answer to the equation, then, on who he was in love with.

“So, he likes you for your mind, and it’s a problem?” Tuba asked.

“I’m proud of the way I look. I like being noticed. The way he wants me, it’s too much pressure.”

I sighed and ran my hands over my face. Bryn looked over at me.

“I’m sorry,” I said. “I’m so sorry, Bryn. It started off so harmless, just some texts. Then it became something more. I couldn’t stop. It felt so good to be desired for once, it was like a drug.”

I held up my hands in defeat. Finally, I came clean.

Bryn’s mouth fell open with realization. “Oh my God, CeCe. I can’t believe I didn’t see it. This whole time, you’ve been falling for Emmett.”

“You’re in love with him,” Bryn stated. She fell down next to me on the couch.

Bryn slapped her hand over her mouth as another idea took hold. “Oh my God. Emmett is in love with you!”

I shook my head, denying the words and throwing them back.

“No, he loves you. He wants you. He could never think about me like that. It was your face that he fell for, not mine.”

“He’s still your boyfriend, Bryn,” I said. I swallowed because I knew my next words were a lie. “We can fix this.”

Katie Ray (also known by her previous author name, Katie Kacvinsky) writes teen and new adult fiction novels. Her books have been nominated for YALSA awards, and First Comes Love was a finalist for the Oregon Book Award. Her screenplay, A High Note, was a semifinalist in the Austin Screenplay Competition in 2015. She currently lives in Ashland, Wisconsin with her husband, two children, and a slightly insane dog.

1 thought on “Don’t Kiss the Messenger Spotlight and Giveaway”