A Taste of Texas Mystery, #3

Tex-Mex waitress and part-time reporter Josie Callahan serves up more Lone Star justice in this spicy mystery from the author of The Good, the Bad, and the Guacamole.

It’s fiesta time in Broken Boot, Texas, and tourists are pouring into town faster than free beer at a bull roping for the mouthwatering Cinco de Mayo festivities. Tex-Mex waitress Josie Callahan, her feisty abuela, and even her spunky Chihuahua Lenny are polishing their folklórico dances for Saturday’s big parade, while Uncle Eddie is adding his own spicy event to the fiesta menu: Broken Boot’s First Annual Charity Chili Cook-off.

But Uncle Eddie’s hopes of impressing the town council go up in smoke when cantankerous chili cook Lucky Straw is found dead in his tent. And when Josie’s beloved uncle is accused of fatal negligence, she, Lenny, and the steadfast Detective Lightfoot must uncover who ended the ambitious chilihead’s life–before another cook kicks the bucket.

“I enjoyed every minute of this high fa looting Texas escapade. The authentic Texas sayings had me rolling on the floor. I’m a Texan and boy did I relate to the towns and chili cook-off so well.”

“I enjoy the Texas flair and touch while all the food talk just makes me hungry. If you enjoy a good cozy mystery that features an adorable dog and a culinary touch then this is the book/series for you.”~Books a Plenty Book Reviews

TO READ THE TASTE OF TEXAS MYSTERY SERIES

In a recent interview I was asked, what makes your new release Cinco de Murder and the rest of your cozy mystery series unique?

Sometimes I create my characters before I begin writing; and other times they walk onto the page when I need them the most. The idea of a family running a Tex-Mex restaurant in a small Texas town came from my editor–but I fleshed out the details. I’d say that’s my favorite part of writing this series—meeting the characters who arrive on the page, sometimes by design and other times by pure accident.

I can’t play favorites—that would be hurtful to my children, uh, characters—but here’s what makes a few of them unique.

Josie Callahan’s my girl! She’s gutsy, funny, brave, and able to put together clues like nobody’s business. She might come across a ditz in the beginning; but she’s very committed to protecting her family and friends. She’s had to overcome the adversity of being jilted at the altar and being laid off from her dream job without losing hope for a brighter future. These life-altering experiences may have brought her unexpectedly back home to the small town she left behind; but she’s not bitter.

A close second on the list would definitely be the quiet, thoughtful, and oh-so-handsome Detective Quint Lightfoot. I am a huge fan of Tony Hillerman’s Native American lawmen Jim Chee and Joe Leaphorn, not to mention Native American actors Adam Beach and Michael Horse. When it came time to create a local deputy, I couldn’t resist introducing the handsome Detective Quint Lightfoot.

Um, I’m feeling guilty. I can’t not mention Josie’s erstwhile abuela, Senora Mari, hard on the outside, marshmallow on the inside. She’s in charge of the kitchen at Milagro, the family restaurant, and a member of the local folklórico dance troupe. A real spitfire!

And what would Lenny, the long-haired Chihuahua, say if I left him out? This adorable bachelor is a big fan of tamales, Tejano music, and wearing his mariachi costume.

Rebecca Adler grew up on the sugar beaches of the Florida Gulf Coast. Drawn to the Big Apple by the sweet smell of wishful thinking, she studied acting on Broadway until a dark-eyed cowboy flung her over his saddle and hightailed it to the Southwest.

A former president of North Texas Romance Writers, Rebecca is currently a member of Sisters in Crime and Romance Writers of America. When not writing, she spends a great deal of time on her other favorite pastime, directing high school theatre. 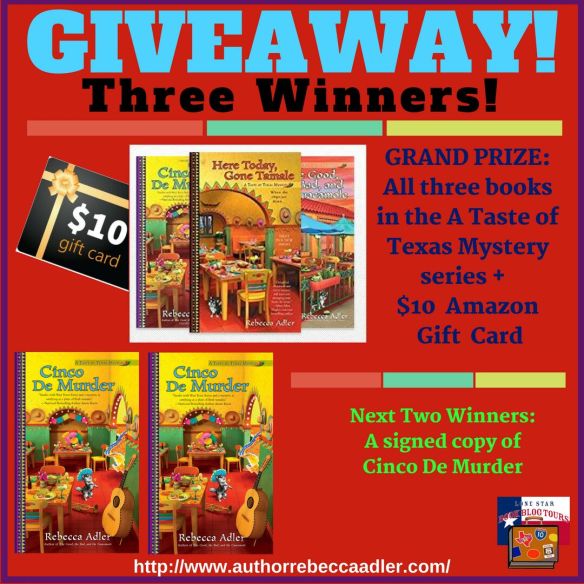