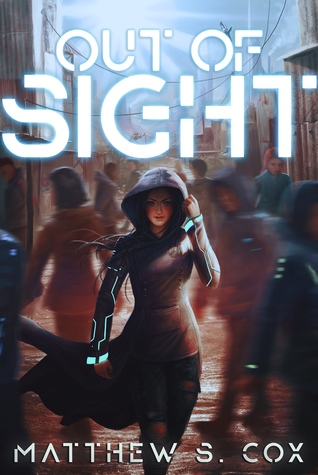 Most Citizens hold Outcasts in dim regard, but Sima never expected they’d throw her off the planet.

In 2411, overpopulation has spread a plaque of filthy, congested city to the corners of the Earth. Government has raised corruption to an art form, and no one hears the cries of those left to die in the dark passageways of civilization. Following the End of Nations, people cling to the only division left: social status.

Since running away from home four years ago, she’s managed to stay a step ahead of death―or worse. At sixteen, she’s getting too old to survive from begging, despite her best effort to pretend she’s younger. Worse, the sidewalks teem with little kids edging in on her turf, monopolizing Citizens’ charity with their wide, pleading eyes and genuine innocence.

A chance meeting with suspiciously nice cops leaves her more confused than ever. Between deadly gangs, unforgiving security forces, and a terrifying madam eager to exploit a girl her age, merely getting older is the biggest threat to her life. With no good choice to make, she risks the least of three evils.

Sima thought her life on Earth had been dangerous…

She hasn’t seen anything yet.

Purchase
Amazon
Review
I’m not ashamed to admit that I judged this book by it’s cover and was instantly intrigued. Visually, it’s stunning. The imagery in this book is equally as stunning. It immediately pulls you in to colorfully descriptive settings and general tone of what Sima has to face. Plus there are additional illustrations that vary per chapter!
This Author clearly is skilled at poetically detailing his plot. I instantly loved the style. Along with a fast paced and intense plot, it was easy to read this in no time at all.
“Apathy and Rebellion strolled hand-in-hand with Death, and the second she made friends with either, he’d come calling.”
Sima has little options after leaving her troubled past behind. Literally begging to survive, becoming older sets new challenges. What few choices she has are taken from her. Suddenly, she’s in the governments hands which sets her on path she didn’t expect. The Progenitor Program.
Sima is a complicated character that does not only grow through her bravery but also kindness. She’s a solitary being and wants to survive by her own abilities. Jealous of the young kids that beg and earn more ‘glint’, her day to day life take a large part in the beginning. Mainly, Sima isn’t perfect and struggles fairly often during the book. Her character was created very well in my opinion. After all, she’s only sixteen and surviving each day takes quite a bit of time. She’ll come to learn more important things in life.
I found the pace well written and mainly enjoyed learning about this dystopian world with little empathy. The secondary characters were equally enjoyable, especially the young kids Sima interacts with. There is some action as well, which develops further in the book and was great. It’ll be very interesting to see how Cox might tie up some less explored secrets of this world. Overall, I would definitely recommend this book!
About the Author

Born in a little town known as South Amboy NJ in 1973, Matthew has been creating science fiction and fantasy worlds for most of his reasoning life. Somewhere between fifteen to eighteen of them spent developing the world in which Division Zero, Virtual Immortality, and The Awakened Series take place. He has several other projects in the works as well as a collaborative science fiction endeavor with author Tony Healey.Hobbies and Interests
Matthew is an avid gamer, a recovered WoW addict, Gamemaster for two custom systems (Chronicles of Eldrinaath [Fantasy] and Divergent Fates [Sci Fi], and a fan of anime, British humour (<- deliberate), and intellectual science fiction that questions the nature of reality, life, and what happens after it. He is also fond of cats. Awards: Prophet of the Badlands (excerpt) – Honorable Mention – Writers of the Future.
Author Links
Website | Goodreads | Facebook | Twitter
Giveaway

4 thoughts on “Out of Sight: Review”