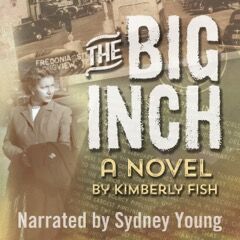 Fans of Pam Jenoff, Susan Elia MacNeal, and Kate Quinn will want to read the first book in a sparkling WWII historical fiction series, The Big Inch. Lane Mercer is a spy recovering from a disastrous mission in France when she’s assigned to protect the interests of the new federal project sending American oil to the Allies. Thrown into the high-stakes world of Texas oilmen, she’s inventing maneuvers on the fly to outwit would be counter-intelligence and Fascist sympathizers. Complicating her mission is a handsome con-artist who manages to be under her feet at the most inopportune times. Trapped between trusting her gut or trusting her informers, Lane has to learn to navigate a town that is laced with more intrigue than she’d ever have guessed, and she soon discovers that the life she might have to save. . .is her own.

Kimberly Fish’s well-researched writing drops readers into the colorful world of the American home front known so well to those who lived alongside the Greatest Generation. Buy The Big Inch today to begin this exciting first novel in a WWII series set in Texas.

PRAISE FOR THE BIG INCH:

“Kimberly Fish’s writing style snatched me out of my easy chair.”

“Kimberly Fish has a gift for combining conflict, emotion, and characterization to create a compelling story.”

The Big Inch packs a wallop of brilliant lines and inspiring women.

“You think you’re the only one who knows failure? For every three steps we take forward, two are covered in shit. If you can’t handle the unpredictable nature of this work, maybe you don’t need to be in Theo’s agency after all.” – Tesco to Lane

Kimberly Fish broaches upon so many wonderful emotions and topics throughout this book, all while giving us an intricate puzzle of mysteries Lane must enfold. Lane is driven by her guilt, frustration, and dreams she hasn’t fully discovered for herself. The pure and unashamed brilliance of her characters are amazing. I can’t help but think from a writers perspective and how massive this book is. Not all in pages, don’t worry readers. It’s in the mystery, in all of the individual and distinct characters. How their backstory and motivations can shine through in the first bits of dialogue.

The narrator, Sydney Young, helps with this too. Lane’s wit flies off the ‘pages’, especially combined with the narrators exuberant characteristic imagination. She captures each voice with it’s own distinct flavor. Showing us her versatility in the sometimes comically energized characters to the stubborn business men. I have to give her props for bouncing between the twang, the drawl, and the high pitched voice of Minnie all in a span of a few minutes at times.

The skips and breaks moved the story along at an even pace that kept me interested. As both a reader and listener of audiobooks, I connect mainly in the internal struggle of the characters. It’s what has always inspired me to write as well. Lane has plenty of external forces forcing her out of a comfort zone she’s strategically created and putting her in danger a time or two. Inside, she’s a mess. To put it bluntly. It seems like tragedy has become a pervasive shadow that follows her. With the harsh history of her mother, the loss of a husband, and the traumatic events in Paris; Lane is one of the most complicated and interesting characters I’ve read. Her interactions with every character are intriguing and very well written. I’ve mentioned the differences of characters but it really is something I enjoyed. It wasn’t overwhelming to me but simply more and more fascinating to hear from Young’s narration. Suffice to say, I’ve kept this vague as to not spoil the several big and small surprises in this book. I personally couldn’t guess most of them correctly. Which was aggravating because I’m usually very good at that…

The Big Inch had a cinematic quality as well. Lets get going Hulu or Netflix. Chop Chop. I’d like my ‘strong women spy/romance thriller’ yesterday please and thank you.

There’s not many downsides to this book. Especially to a reader that enjoys this genre. While it’s not my first choice, I obviously enjoyed it quite a bit. It had a great sense of balanced writing to keep you entertained. Young also is very talented in narrating and I could hear her potential for improving as well. The only thing that was an issue were the pauses she tended to take. At some points, it was to create tension or the meaning, but others seemed random at times. Still, after a few chapters, it was easy to acclimate to it. This book can be enjoyed in different ways. When I wasn’t able to use headphones, I tended to simply grab the book and start reading. This made it more intriguing as I was able to picture the characters in new ways and also read the action scenes how I like. Young’s narration also brings you steadily through the beginning of the book, which starts a bit slow before picking up. By being able to listen to it, it was easy to remain interested throughout the introductions and buildup.

All in all, this was some well-research and impressive writing. I’d recommend it to those that love mysteries, period dramas, strong women characters, and historical fiction. Or just anyone that likes reading. You know who you are. 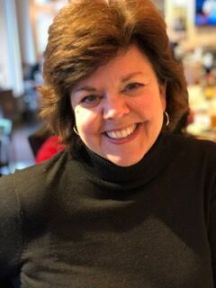 Kimberly Fish has been a professional writer in marketing and media for almost 30 years. In the course of research for the Longview Chamber of Commerce 100-year compilation, she stumbled across a 1940s federal works project that was too good, too war-winning, not to be retold to modern audience. In 2017, she released The Big Inch, her first WWII spy thriller detailing the crazy, big pipeline project that fueled the Allies to a win in Europe. The Big Inch has also been released as an audio download on Audible. That eye-opening novel was so consumed by readers, she quickly followed it with a second WWII spy thriller set in Longview, Harmon General. Both of these novels will be helpful to her work with the City of Longview’s 150th birthday celebrations which begin in January of 2020. Comfort Plans, a contemporary novel also set in Texas, continues her love of history by weaving old letters into the renovation of an iconic Hill Country farmhouse.

Kimberly enjoys speaking on the value of weaving history and nostalgia into our plans as we grow our communities for the future.

Sydney Young is a lawyer, award-winning writer and audio book narrator from the Lone Star State. Her next theatrical project will be directing “SHAKESPEARE IN LOVE,” for the Paris Community Theatre stage (Feb. 2019), while her novel “I AM HOUSTON,” is being submitted for publication by the Loiacono Literary Agency. Sydney has long been a reading advocate, including with her readings to an adopted second grade class each year. She loved voicing THE BIG INCH for all of its authentic Texas voices and true characters, all while she learned the history of the East Texas oil effort for World War II.  Visit Sydney’s website for more information on her writings, theatre, and audio books.

1 thought on “The Big Inch Review”