DESTINY’S WAY
A Novel of the Big Bend
by
Ben H. English

Kate Blanchard woke up one morning in a dream home she could no longer afford, with a young son who needed a man’s influence, and not a friend among those who had claimed to be prior to her husband’s mysterious disappearance. About all she had left was a ramshackle ranch along Terlingua Creek, sitting forlornly in the desolate reaches of the lower Big Bend. It was the only place left she could go. There she finds a home and a presence of something strange yet comforting that she can’t put her finger on or fully understand. With that ethereal presence comes Solomon Zacatecas, a loner with his own past and a knowledge of her land near uncanny in nature. He helps her when no one else can and is honest when no one else will be, but she suspicions that he is not always completely so. Yet her quiet, unassuming neighbor proves to be more than capable in whatever situation arises. That includes when standing alone against those who would take everything else that Kate had, including her life as well as her son’s.

PRAISE FOR DESTINY’S WAY: “This is one of those rare books that you simply can’t put down. Ben English ‘s writing style is pure magic. He really brings this historical fiction book to life. Immediately, you are drawn to the main characters Kate and Solomon and feel as though you are right there next to them, experiencing what they are experiencing. Destiny’s Way is one that would do well on the Silver Screen.” — Catherine Eaves, published author “Ben does a superb job with this book! Excellent characters, true-to-life environment that is part and parcel of the story, twists and turns enough to make you wonder what is going on, and a slice of life down in Big Bend that rings true. That area has historically been full of ‘characters’ throughout its history, and Ben brings those characters into the book, raising the hair on the back of your neck. Highly recommended!” — J. L. Curtis, author of the Grey Man series “Ben, I love how your words and your memories reach out and connect the past with the present and touch so many people along the way. You are the connector! Bravo Zulu, my friend.” — Matt Walter, Museum of the Big Bend Curator

Music has much to do with how this book was written, as music has always had much to do with my life. When I am alone, conducting boots-on-the-ground research, certain songs go through my mind, often repeatedly. Many of these have been around for generations, some go back a century or more. Each in turn is enduring, much like the land I have used them to describe.

If Destiny’s Way has a theme song, it is this one. In fact, the lyrics start the book. I stated how some of these songs go back a century or more, and this sad Mexican ballad has roots that go back even further than that. Several of the songs I have selected come from across the border because things Mexican helped shaped the culture of the Big Bend much like contributing Anglo influences. In truth, they do not clash as much as complement each other.

You cannot do any song list about any part of the Lone Star State without including a Bob Wills tune. Of the many that he and the Texas Playboys did, this has to be one of the most memorable. Waylon Jennings was right; when you cross that ol’ Red River, Bob Wills is still the king.

Any man who has ever pulled night guard or patrol can understand this song about the lost loves and “could have beens” instinctively. Such sentiments loom large at times when alone and in spots like Fresno Canyon or along Terlingua Creek.

“Carabina Treinta-Treinta”                Charro Avitia
This tune is my favorite of the Mexican Revolution era. Anyone who has ever felt the balance of a Winchester ʼ94 and jacked the lever on it understands why someone would write a song about this weapon. “La carabina treinta-treinta” is one of the most popular rifles ever produced, and most experienced folks on either side of the river well know why.

Another Mexican Revolution song with many versions, but I prefer the Cuco Sanchez recording. In the decade of 1910-1920, the Mexican people not only suffered through the brutalities of an almost genocidal war, but also the trio of pale horsemen representing drought, starvation, and epidemic. No one really knows how many died during those years, and when you hear a song like ‘La Adelita,’ you think of the individual hope, and grief, of those who were caught up from all sides.

It has long been my estimation that if one desires to know where they are going, they first need to know where they came from. This is a mantra repeated throughout Destiny’s Way for more than one character in the book, as well as a philosophy for the story as a whole. This song, speaking so eloquently of the past of one man, illustrates why this is so.

An adaptation of the poem of the same name, this song, along with some spectacular accompanying paintings, serves as one of the finest intros to any Western movie ever. Listen to the words carefully and picture yourself moving along the Dodson Trail below the highest points of the Chisos. I’ve been there, with that same song running through my head.

A favorite of my grandfather’s, they just about wore out the record in the old jukebox at the Lajitas Trading Post. Most of the selections contained therein were Mexican in nature, played far more frequently than any of the Anglo songs. I suppose that was why I was teased for speaking English with a Mexican accent, after my family left the lower Big Bend.

This was written by Dale Evans and performed many times by hers, her husband Roy Rogers, and the Sons of the Pioneers. Picture yourself standing in front of the opening for the Window in the national park on a clear day, seeing God’s great creation stretch out for miles upon miles as far as your eyes can take you. The sun and sky above form the roof of this church, the near vertical high ground on either side serve as the walls, and the rocks lying about your choice of pews. Yes, it is the place where I worship.

If you have gone without water for a length of time in a hot, dry desert, then this song hits as close to home as any other you could ever think of. I’ve been there before but never so much as putting one foot in front of the other on a hundred-plus-degree day south of Glenn Spring. I was carrying a fifty-pound pack and hadn’t had a drop of moisture in sixteen hours. And you have to keep moving, or you will surely die.

Everyone has a breaking point and often enough it starts sooner than later, until we realize that so many others had so much more to bear than we ever will. Think of the endless darkness of a mine tunnel at the foot of California Hill, the Mariscal, the Shafter, the Study Butte, or the Chisos Mining Company. Think about what it took to produce candelilla wax, which has to be one of the toughest jobs anyone could ever imagine. Think about what your own ancestors went through when called upon. That’s when your own problems start to diminish, and you begin to realize that what you are facing now “ain’t nothin”.

With the recurring theme of the Marine Corps so prevalent in Destiny’s Way, I thought it only right to include a tribute to my old alma mater. After all, they say time and again to write what you know. Every time I put on my boots, shoulder my pack, and head out, I realize what an integral part the Corps has played in my life. Mother Green gave me so much but saw to it that I earned every last bit. Semper Fi ʼtil the day I die.

This rousing ballad encapsulates the life story of Texan Charlie Siringo, one of those larger-than-life characters of the Old West whom you usually don’t hear much about. Sung with understanding and insight by fellow Texan Red Steagall, it tells of Siringo’s life as a cowboy, a storekeeper, a Pinkerton man, and ultimately a successful writer. Some have questioned if all those events actually happened. Well if they didn’t, they should have.

Dave Stamey’s arrangements and singing are simple in nature: the sound of a six-string guitar and the voice of a man who has actually been there, done that. This ballad is a near-perfect mixture of that simplicity, concerning another man who went his own way and carried through faithfully in his personal philosophy of worth. They say the simple things in life are the most important, as well as the hardest to accomplish. “Song For Jake” is a reminder of this delicate balance for us all.

A real cowboy who sang about that sort of life with a special authenticity, Chris LeDoux left this mortal life way too soon. But in the meantime, he shared so much of worth with the rest of us, including this song. It was as if he was writing his own epitaph, as well as so many others made from the same clay. My youngest brother was one of those; we lost him only this last year. Sometimes, when the shadows are just right, I think I catch him out of the corner of my eye, still riding fences.

This poem was written nigh a hundred years ago by the greatest cowboy poet of all Bruce Kiskaddon. It comes to mind while prowling the lower Big Bend, most of all at such majestic spots as the South Rim of the Chisos. 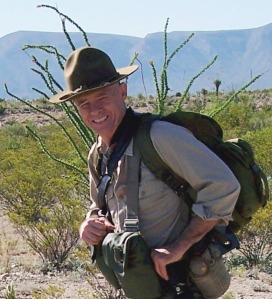 Ben H. English is an eighth-generation Texan who grew up in the Big Bend. At seventeen he joined the Marines, ultimately becoming a chief scout-sniper as well as a platoon sergeant. Later he worked counterintelligence and traveled to over thirty countries.
At Angelo State University he graduated Magna Cum Laude along with other honors. Afterwards Ben had a career in the Texas Highway Patrol, holding several instructor billets involving firearms, driving, and defensive tactics.
His intimate knowledge of what he writes about lends credence and authenticity to his work. Ben knows how it feels to get hit and hit back, or being thirsty, cold, wet, hungry, alone, or exhausted beyond imagination. Finally, he knows of not only being the hunter but also the hunted.
Ben and his wife have two sons who both graduated from Annapolis. He still likes nothing better than grabbing a pack and some canteens and heading out to where few others venture.