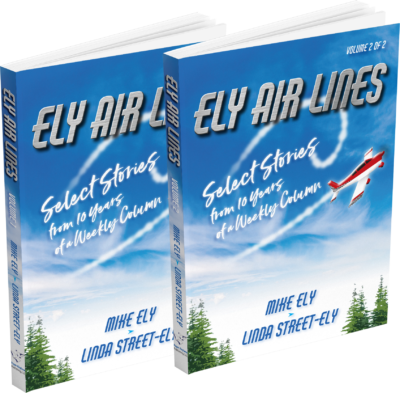 Buckle up and fly with Mike and Linda Street-Ely to discover amazing people, interesting places, and the conquest of flight. Since 2007, readers have enjoyed engaging articles weekly in the newspaper column, “Ely Air Lines.” Now you can step aboard to enjoy a collection of stories that explore the vast realm of the flyer’s world.
CLICK TO PURCHASE!
│ Volume 1 on Amazon│ Volume 2 on Amazon │
│ Paper Airplanes Publishing, LLC│ Barnes and Noble│
│ IndieBound│
ADD VOLUME 1 ON GOODREADS
ADD VOLUME 2 ON GOODREADS

10 YEARS OF A WEEKLY COLUMN, VOLUME 2

Don called his ground roll about twenty-five seconds later. My insides felt like iron. I had the skill and experience. I got this.

We scanned the engine instruments. Cylinder head tem­peratures were good—not too hot. RPMs were higher than normal cruise flight, but that was intentional.

Keep it straight; he’s not far behind.

Mike called, “Race 55, turn one.” I snapped into a bank, our left wingtip pivoting on the turn point, and just as abruptly leveled the wings quickly coming out of the turn.

We watched the seconds tick on our GPS, listening intently for Don’s turn one call.

By the second turn, there were fewer seconds separating us. Keeping my eyes on the course, I asked Mike, “Can you see him?”

At the third turn, I dipped our left wing in a purposed, calculated bank. My eyes scanned quickly to monitor my inputs, my human factor performance.

Sharp left bank. Look down the wing. Wingtip on the turn point.

Lower the nose slightly to increase speed in the turn.

Eyes back to the turn point. Check the compass.

Don’t overshoot. Turn out on course.

Quick, level the wings. Don’t let the nose come up.

Mike made our third turn call.

Silence in the airplane as we waited for Don’s call. We must have done better on that turn. We gained a couple of seconds on him. 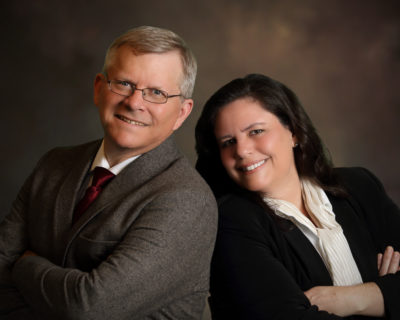 Mike Ely has logged thousands of hours over more than forty years as a professional pilot. He holds an airline transport pilot certificate with multiple type ratings and a flight instructor certificate. Mike has taught people to fly in small single engine airplanes, gliders, turboprops, and corporate jets. As a freight pilot and an international corporate pilot, he has flown through all kinds of weather, to many places, both exotic and boring. His love for writing was instilled by his father at an early age. Linda Street-Ely is an award-winning, multi-genre author and playwright. She also holds an airline transport pilot certificate, a commercial seaplane certificate and a tailwheel endorsement. She has air raced all over the U.S., including four times in the historic all-women’s transcontinental Air Race Classic. Besides flying, Linda has a keen appreciation for great storytelling. She loves to travel the world, meet people, and learn about other cultures because she believes great stories are everywhere. Together, Linda and Mike are “Team Ely,” five-time National Champions of the Sport Air Racing League, racing their Grumman Cheetah, named the “Elyminator,” and dubbed “The Fastest Cheetah in the Known Universe.” They live in Liberty, Texas.
◆ PAPER AIRPLANE PUBLISHING, LLC ◆ PAPER AIRPLANE BLOG ◆
◆ FACEBOOK ◆ TWITTER ◆ INSTAGRAM ◆ PINTEREST ◆
◆ MIKE ELY ON GOODREADS ◆ LINDA STREET-ELY ON GOODREADS ◆
◆ MIKE ELY ON AMAZON ◆ LINDA STREET-ELY ON AMAZON ◆
◆ MIKE ELY ON BOOKBUB ◆ LINDA STREET-ELY ON BOOKBUB ◆