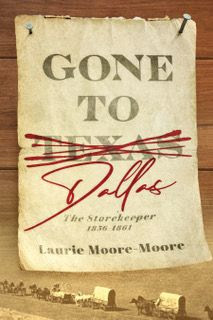 Sara’s husband was a disappointment in life, but she had to admit he was a handsome corpse.
Climb aboard an 1856 Dallas-bound wagon train and join a plucky female protagonist for the journey of a lifetime in Laurie Moore-Moore’s richly entertaining new book, Gone to Dallas, The Storekeeper 1856-1861. Far from your average historical novel or western, Gone to Dallas is a compelling tale of migration, betrayal, death and dreams—peppered with real people, places, and events. With a cast of interesting characters and more bumps and hazards than a wagon trail, Gone to Dallas tells the unforgettable story of a formidable frontier woman in the context of true Texas history.
It had seemed so romantic when Morgan Darnell courted Sara in Tennessee, finally convincing her they should marry and join an 1856 “Gone to Texas” wagon train traveling along the “Trail of Tears,” through Indian territory, and across the Red River into Texas.
In a twist of fate, Sara arrives in Dallas a 19-year-old widow, armed with plenty of pluck, and determined to open a general store in the tiny settlement of log cabins on the Trinity River. Standing in her way as a young woman alone are a host of challenges. Can Sara (with the help of her friends) pull herself up by the bootstraps and overcome uncertainty, vandalism, threats, and even being shot?
Follow Sara as she strives to create her store while living Dallas’ true history — from the beginnings of La Réunion (the European colony across the Trinity) to a mud and muck circus, a grand ball and the mighty fire that burns Dallas to the ground. Dallas is a challenging place, especially with the Civil War looming.
Even with the friendship of a retired Texas Ranger and Dallas’ most important citizen — another woman — is Sara strong enough to meet the challenge? The risks are high. Failure means being destitute in Dallas!
In Gone to Dallas, The Storekeeper 1856-1861, author Laurie Moore-Moore spins a page-turner of a tale salted with historically accurate Texas events and populated with real characters. It’s Portis’ True Grit meets Texas history.
READER PRAISE FOR GONE TO DALLAS:
“Creative and captivating…five stars!”
“An unforgettable journey…superb writing.”
“I was hooked at the very first sentence.”
“Lovely work of historical fiction…can’t wait for the sequel.”
“Brilliant!”
CLICK TO PURCHASE!
│ Amazon│ Barnes and Noble │Smashwords│Kobo│

You call Gone to Dallas an historical novel salted with history. What does that mean?

The background in which the story unfolds is built around actual happenings in Dallas and in Texas at the time—that’s what I call, “salted with history.” For instance: a grand ball, the visit of a mud and muck circus, the collapse of the bridge over the Trinity, a plague of locusts, the fire that burns Dallas to the ground. I couldn’t make up more interesting events as a backdrop to the story! And although most of my characters are fictional, the book is also peppered with real people—from Sarah Cockrell, often called Dallas’s first capitalist, and certainly a brilliant businesswoman, to Barry Derrit, the slave who manned the toll bridge over the Trinity River. These characters play active roles in the fictional story. My goal was a really good read, rooted in history, with a spark of inspiration

It’s hot off the press . . .what early response have you had?

*Paul Hobby, former CEO of Texas Monthly wrote, “Laurie Moore-Moore projects a tale of decency and resourcefulness that is fundamental to the continuing identity of the American West in general and of Texas specifically.”

*Teresa Burleson, Director, Stockyards Museum, Fort Worth, said, “Sara was fascinating—a strong and enterprising young woman. She had the grit and moxie that Texas women are known for. A good fictional read with real historical events thrown in—an interesting twist. I come from a long line of strong Texas women, so I find Sara and the other women in this story inspiring.”

*Dr. W. Arthur Porter, former Professor and Associate Dean for Innovation at the University of Texas at Austin, used multiple exclamation marks in his review of the book. “A female protagonist who’s Tennessee Smart and Texas Tough! Gone to Dallas captures an historically accurate essence of early Texas and how committed and tenacious early settlers had to be to make it — especially the women!”

Why is the novel’s title Gone to Dallas?

Back when Texas was part of Mexico, Americans fleeing the law, creditors, or other problems would sometimes flee to Texas, generally painting or posting signs saying “Gone to Texas” or GTT on their doors or fence posts. The message became associated with law breakers and other rascals. When Texas won its independence, it began granting land to newcomers. People in search of homesteads and opportunity began to flow into the state. Signs were posted and wagons painted with “Gone to Texas.” This time, the words were a symbol of available land and new opportunity. Some of those who were “Gone to Texas” were “Gone to Dallas”—Thus the novel’s name.

Gone to Dallas is book one of your Brave and Strong series. Why that name?

The name comes from the last phrases of the Texas state song:

“God bless you Texas and keep you brave and strong

that you might grow in power and worth throughout the ages long.”

It seemed to me that our Texas ancestors—men and women alike—were brave and strong. I wanted to recognize and honor that in the name of the book series and in my new Podcast, Texas Brave and Strong.

I chose Dallas because it’s home and also because the city has a fascinating history!  Gone to Dallas is keyed to the period when Dallas began to take shape and grow. It ends just as the Civil War is about to begin. Also, people all over the world seem to have a fascination with the city. Some of that goes back to the old Dallas TV series, and to the mystique of the Dallas Cowboys football team in Roger Staubach’s era. I traveled in my business for thirty years and taxi and Uber drivers would almost always want to talk about some aspect of Dallas as soon as they knew where I was from.

What is your writing process?

I’m what the publishing world calls a seat-of-the-pants writer. I don’t outline the entire story in advance.  I just sit down and start to write. The first 54,000 words took less than a month to write. . . although they ended up being in the middle of the book! Feedback from very early readers was helpful in shaping the story, but the characters took control and I just followed with the words. I was sometimes surprised by the twists and turns in the story. I hope readers will be as well. Writing the novel was a joyful experience!

Any clues about the sequel? 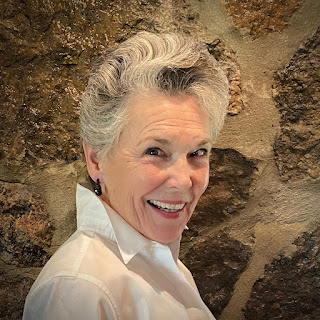 From the author: “My husband, Roger, and I have been blessed with many adventures in life—from trekking across India’s Thar desert on a camel (and sleeping in the sand on our camel blankets) to repeating marriage vows in a remote Maasi village in Kenya (my dowery was one cow and one goat). My favorite adventure? As a fifth generation Texan, it is discovering more and more Texas history and writing about it!
We live in Dallas, Texas but sneak away when possible, to a mountain-top cabin overlooking a lake in former Indian Territory (the Oklahoma Ozark Mountains) The cabin is unique—there is a nine foot chainsaw bear in our entry hall. The house was built around it. Never thought I’d own a piece of chainsaw art, much less a nine-foot bear. Life is full of surprises. . . just like a good historical novel.”
Laurie Moore-Moore is a retired entrepreneur who has built and sold multiple businesses and served on the Board of Directors of an international corporation.
◆  WEBSITE  ◆  BLOG ◆
◆ FACEBOOK  ◆ AMAZON  ◆  GOODREADS  ◆ 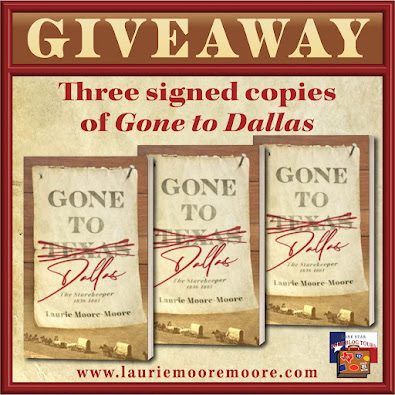