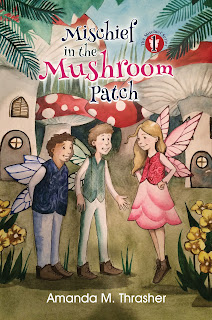 Mischief in the Mushroom Patch, 2/2013, 146 pgs
Where do fairies get their magical fairy dust? After leaving the mushroom patch without permission, two mischievous fairies find themselves in more trouble than they can handle. Boris, with a broken ankle and a bent wing, is unable to walk or fly, and Lilly must devise a plan to escort him safely back to the mushroom patch. As with all actions, there are consequences! Lilly and Boris have broken colony rules and wasted precious fairy dust. Sentenced to work in the dust factory, the two learn a valuable lesson about the production of fairy dust, but can they survive the foreman?
Amazon│Barnes and Noble
Progressive Rising Phoenix Press | Author’s Website 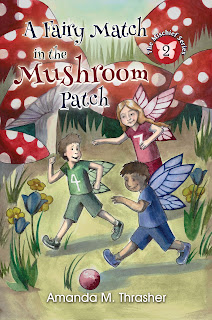 A Fairy Match in the Mushroom Patch, 2/2013, 162 pgs
Lilly, Boris, and Jack are back! The three friends are together again in this newest addition to the Mischief Series. A natural disaster has taken the elders by surprise, and the scientists are unprepared. Damage to the colony is inevitable! Can the Master Engineers devise a plan to save the colony before they lose their home? The fairies’ Kick-a-Berry Match has been postponed as well, and the fairies must find new ways to entertain themselves until the pitch dries up. Along the way, they make a new friend named Pearle, and though she cannot walk, she can fly with ease. Valuable lessons about friendship, teamwork, and perseverance will be learned as the fairies embark on their newest adventure.
Amazon│Barnes and Noble
Progressive Rising Phoenix Press | Author’s Website 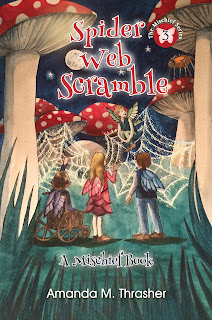 Spider Web Scramble, 2/2016, 170 pgs
Every third year, on the fifth full moon, the Mushroom Patch holds a magical Spider Web Scramble. Excitement buzzes through the forest as the fairies prepare to scramble the magical webs in order to complete the course. As a special treat, the elders disclose that the stars will be coming down to join in and play. A wish will be granted for the fairies who are pure of heart and manage to beat the clock, locating the star that has their name etched on it. With the no-fly rule in place, teamwork is the only way Pearle can complete the course. But little do they know that possible danger is in their midst. Will the magical spider web scramble be postponed? Will the stars grant Lilly, Boris, and Jack their wishes? Find out in this delightful magical adventure.
Amazon | Barnes and Noble
Progressive Rising Phoenix Press | Author’s Website 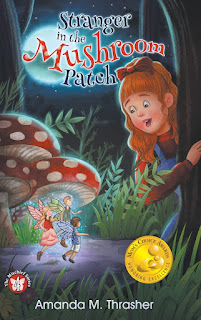 Stranger in the Mushroom Patch, 2/15/22, 212 pages
Gold Recipient of The Mom’s Choice Awards® (MCA)
Lilly, Boris, and Jack Are Back! Get Ready for a Human Attack!
Who knew a slimy moss bomb war between friends would lead to an adventure of a lifetime! From strategizing with the elders for their playful battle to, of all things, escaping the clutches of a human! It doesn’t take long to learn the fairies shockingly have more in common with the child than they ever could have imagined. Broderick, everyone’s favorite spider, provides the goodies, and Lilly supplies the fairy songs and games. Filled with twists and turns, adventure, and fun, find out if the fairies and the elders can help the stranger reunite with her family. Or will there be a human attack?!
Amazon | Barnes and Noble
Progressive Rising Phoenix Press | Author’s Website

STRANGER IN THE MUSHROOM PATCH

Monsieur Pierre appeared out of nowhere and stood behind Boris as he released a slimy bomb. He grabbed Boris by the scruff of his neck, but it was too late. Boris, dangling a foot off the ground, watched his moss bomb rip through the air and splat all over Jack. Stinky slimy moss ran down the left side of Jack’s temple. Though Jack should have been expecting an attack, he’d momentarily let his guard down, and the stinky moss bomb took him by surprise.

The sting forced Jack to yelp out loud and jump right out of his chair. His eyes searched the room for Boris. Monsieur Pierre, though he dared not say it out loud, recognized the skill it took to pull off such a sneak attack while dangling in midair.

As soon as Jack spotted Boris’s predicament and realized Boris had managed such a hit, he mumbled a compliment under his breath.

Boris, a good-sized fairy, looked down at the floor he no longer touched with his feet and was reminded that Monsieur Pierre was quite strong indeed.

“How many times have you been told not to pelt moss bombs in the dining hall, Boris?”

Boris shrugged his shoulders. He wasn’t trying to be rude; he honestly had no idea how many times he’d been told not to do it. He hadn’t been keeping up and was trying to calculate how many times it had actually been.

“Whatever it is you’re going to say, don’t,” Monsieur Pierre added as he set Boris back down on the ground with a loud thump. “I would confiscate them,” Monsieur said as his eyes darted toward Boris’s pocket, where another moss bomb had already appeared and was ready to go, “but we all know there’s no point!” 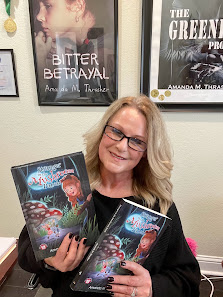 Amanda M. Thrasher was born in England, moved to Texas, and resides there still. She’s an award-winning author of Young Adult, General Fiction, Middle Grade, Early Reader Chapter, and Picture Books. Amanda is a multiple Gold Recipient of The Mom’s Choice Awards® (MCA), earning the award in multiple categories, including Young Adult, General Fiction, and Early Reader Chapter Books. She is also a multiple Gold Medal winner of the Readers’ Favorite International Book awards, a New Apple Literary Award, and has earned a first-place North Texas Book Festival award.
Amanda founded and is the CEO of Progressive Rising Phoenix Press, an independent publishing company. She shares her writing and publishing experience with others through school visits, book signings, trade conferences, and workshops for aspiring writers of all ages.
In addition, Amanda was contracted to write a graphic novel for the Driving on the Right Side of the Road Program. The publication is part of the Driving on the Right Side of the Road (DRSR) program, developed by the Law-Related Education Department of the State Bar of Texas Law Focused Education, Inc., and the Texas Municipal Courts Education Center with funding from the Texas Court of Criminal Appeals and the Texas Department of Transportation. The program’s purpose is to offer a preventive educational program to encourage responsible decision-making when it comes to obeying traffic laws and following safe practices. The graphic novel titled What If … A Story of Shattered Lives was adapted into a reader’s theater for as few as five speakers or as many as twenty-six.
◆  WEBSITE  ◆  FACEBOOK  ◆  TWITTER ◆ AMAZON  ◆
GOODREADS ◆BOOKBUB◆ INSTAGRAM
————————————–
GIVEAWAY!  GIVEAWAY!  GIVEAWAY!
ONE WINNER!
Signed copies of the Mischief books, Captain Fin
+ $50 Starbucks Gift Card (US only; ends midnight, CDT, 7/1/2022) 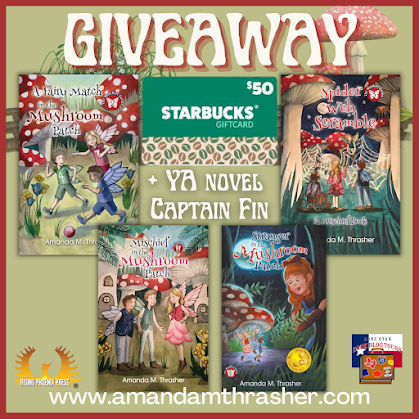 2 thoughts on “The Mischief Series: Excerpt”