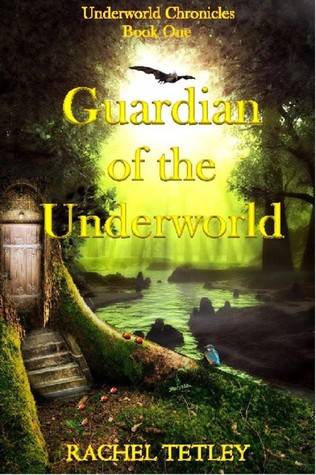 Guardian of the Underworld (Underworld Chronicles, #1)

Two worldsNeither can exist without the other

And one guardian to ensure their survival

But a family with a score to settle

Forces one boy, into a dangerous adventure

Jake Summers is an ordinary boy with an ordinary family- so he thinks. He has just spent another summer holidays building dens in the woods with his best friend Paul. But when someone special unexpectedly dies, Jake is determined to find out the truth, unaware that it will change his life forever.

He discovers a key to Grandpa’s forbidden room, and is plunged into a long-forgotten magical world, together with class mate Arianna Brown and a strange creature called Noggin. Stormy seas, underground carts pulled by Golden Eagles and a dragon all stand in his way. He must race against time to fulfil an ancient magical prophecy and save the world.

“The storm disappeared as quickly as it had started.  All that was left was the rhythmic dripping of water from the leaves no longer able to hold their weight, and the distant but constant trickle of the river that ran through the woods.

A kingfisher sat on a branch high above, looking down at Evander.  The man’s body was hidden by night’s cloak, but his face glowed in the moonlight.  In fact, it seemed as though all the light that lit the woods — the shimmering reflections, the glowing fireflies — was now focused on his face, and was getting brighter.  It held at its brightest for just a second, then faded and spread out amongst the trees.

A second kingfisher appeared on Evander’s chest.  It flew up to join the other and they peppered each other with kisses before flying side by side into the heart of the woods.”

This book has a lot of good things going for it.  It was a little slow at first, but soon picks up speed.  Then it is a roller coaster ride to the end.  The story is well written and very imaginative.  The main characters, Jake and Arianna, are very likable and easy to relate to.  The villain is truly despicable.

There were some things that I didn’t like about the book.  Sometimes there wasn’t enough description to understand what was going on.  I would be reading and then I would think what? and then I would have to go back and read it again to get things a little clearer in my head.  Also, the author created a good villain and then didn’t use him to his full potential.  There should have been an epic showdown between him and the main protagonists.

Overall, it was a good read and I would recommend it to middle school age children.  I would also recommend it to any one who likes the  Harry Potter and  Percy Jackson series.  I give this book four stars.

Rachel Tetley lives with her five children on the top of a wooded Devon hill overlooking the sea. When she is not writing, she is riding her horse Smudge, playing her piano or experimenting to invent the worlds best recipe for Chocolate Brownies. She loves to do anything as long as it’s exciting and has to be doing something all of the time. In fact the idea for her first book Guardian of the Underworld, was created whilst she was sleeping!