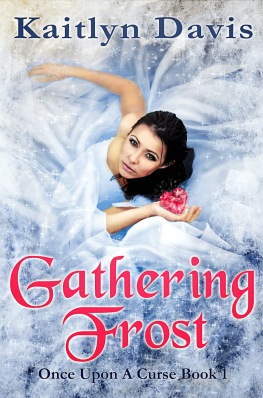 Summary from Goodreads:
Will his kiss be enough to revive her frozen heart? Once Upon A Time meets La Femme Nikita in GATHERING FROST, a dystopian romance from bestselling author Kaitlyn Davis that reimagines the classic fairy tale of Sleeping Beauty.

Jade was only a little girl when the earthquake struck. Before her eyes, half of New York City disappeared, replaced by a village that seemed torn out of a storybook. Horses and carriages. Cobblestone streets. A towering castle. And, above all, a queen with the magical ability to strip emotions away.

Ten years later and Jade has forgotten what it is to feel, to care…even to love. Working as a member of the queen’s guard, she spends most of her time on the city wall staring at the crumbling skyscrapers of old New York. But everything changes when the queen’s runaway son, Prince Asher, returns. Jade is tasked with an unusual mission–to let the Prince capture her, to make him trust her, and then to betray his secrets to the crown. In return, she’ll earn her freedom. But life outside the queen’s realm is more than Jade bargained for. Under Asher’s relentless taunts, her blood begins to boil. Under his piercing gaze, her heart begins to flutter. And the more her icy soul begins to thaw, the more Jade comes to question everything she’s ever known–and, more importantly, whose side she’s really on.

About the Author
I’ve always been a writer. I grew up duct taping my novels together, started writing complete manuscripts in high school and studied creative writing at Johns Hopkins University. Upon graduating, I decided it was finally time to actually give my dream career a chance. So, of course, I started writing a young adult paranormal romance series — and no, I’m not jumping on the bandwagon. I’ve been a true paranormal supporter for my entire life! I blame my obsession almost completely on Buffy the Vampire Slayer, my all-time favorite television show. And, before you ask: Yes, I own every season… even the post WB ones! I especially challenge anyone to watch the first three seasons and not fall in love with Angel, securing a lifelong love of vampires! Other culprits of my paranormal obsession are some of my favorite authors: JK Rowling, Raymond Feist, Meg Cabot, Richelle Mead, Lynne Ewing and Tamora Pierce.
Author Links:
Website│Goodreads│Twitter│Facebook│Pinterest│Wattpad│Youtube│AmazonGIVEAWAY:

The world ended on a Saturday in spring. Beautiful. Sunny. The sort of afternoon that pulled New Yorkers from their hibernation, urging them to shed their floor-length coats and stiletto boots, to let the sun kiss their pale skin once more.

When the earthquake began, my mother and I were in Central Park. “Pedal!” I remember her shouting. “Pedal!” And I did. My little legs pumped in circles, my heart lifted as I felt her fingers release the bike, and suddenly I was riding on my own. For the first time. The breeze whipped against my grinning cheeks, stinging my eyes.

But then the ground shook. The earth began to tremble. And I had no hope. In a flash, I was on the ground, sandwiched against the concrete as screams rose around me. Darkness stole my vision as my mother’s arms encircled me, hugged me closer. Teeth chattering, I tried to be strong. But tears leaked from my eyes, the cries of a baby. Shame burned my chest.

Time passed but my young mind had lost count. Minutes. Hours. I still don’t really know. But when the ground stilled, I woke to a new world.

My mother was frozen with shock, so I had to pull against her hold, straining to see. Over her shoulder, south, I saw smoke and ash rising like clouds over my skyline. The trees looked gray, the sky washed out. Faint outlines of buildings were only just visible through the fog, a mix of skyscrapers still standing or leveled to the ground.

I looked at my mother. Her arms had fallen mutely to her side. I’ll never forget her green eyes, pulled so taut I swore they were about to snap. Her lips were just slightly open.

But she didn’t hear. Something behind me had her so transfixed that even her only child, her little girl, could not shake the alarm.

Like a line driven through the ground, we stood on one side with the past while our future rested a few feet away. A future that was backward in time.

Atop a hill, a giant castle rose from the ground, surrounded by green lawns where apartments used to stand. At its base were stone houses, smoking from fires. Horses. Carriages. Carts. And people. People dressed in dull brown clothes looked at us just as we looked at them—confused and terrified.

And then she appeared.

Her gown sparkled in the sun, brilliant red popping against a dull backdrop, cinching in at the waist and then expanding into a magnificent skirt billowing in the breeze. Silky white gloves encased her hands. Jewels dripped around her thin neck. Pins held her hair so that it curled elegantly down her back, and resting right above her forehead was a golden crown.

My eyes went straight to her.

A princess. I knew she would save us. I had seen it before, so many times, so many princesses saving the day.

I ran to her, crossing the threshold without hesitation as my mother screamed at me to come back. My mom was an adult. And adults didn’t believe in these things. I knew she would see my side if I could just get the princess to help us.

She knelt as I approached. A wide inviting smile spread across her face. Her arms caught me.

“What is your name child?” Her voice was warm. It soothed me, relaxed me, filled me with hope.

She brushed my bangs from my forehead, kissed it softly.

“Would you like me to help you? To make all of your fears go away?”

“Yes!” I wanted to run to my mom, to show her she didn’t need to be afraid. The princess would help us. But I couldn’t. Something stopped me.

A hand pressed against my chest, pricked my skin.

I looked up at the princess, struggling to break free of her hold, when a freeze snatched my heart, so cold that it burned. I tried to speak, but I was frozen. My limbs grew heavy, my lips felt fat, my vision started to spot.

“Don’t worry, little Jade. I’m just putting you to sleep for a little while. You’ll wake up soon.”

I did. In a cell with other frightened girls. But I never felt the same. Icy. That’s what some of us started calling it, this feeling like our hearts won’t thaw. Even a fire doesn’t warm me. I am hard. Frigid. Emotionless. Sometimes I think I must still be caught in a long dream.

But time has only made me tougher.

Now I know the princess by another name, Queen Deirdre, the Ice Queen.

And I wish I could say I was the hero of the story. A resister. A rebel. Someone who lived to bring an end to the queen who stole my childhood—my mother, my life, my very world.

I’m not the good guy.

I’m the one who puts the good guys in their graves.