There are some sacrifices we never recover from…

Faye Middleton is at a crossroads in her life. After breaking the last seal and discovering their Rebellion camp was destroyed, she returns to Ethryeal City, determined to avenge the deaths of her mother and friends.

Faye and her team do what they can to keep their Coven intact now that the Priesthood has fallen, but with Darkyn attacks threatening the exposure of their kind, the Primeval Coven is close to being cut off by the United Nations.

Until Meredith, a mysterious Darkyn, appears, claiming she has information that will help Faye bring down the two responsible for the deaths of her mother and friends, and for the fall of her Coven. The only catch is that it requires returning to the very place she lost her mother—the Underground.

Not wanting to risk any more lives, Faye and Weldon agree to go with Meredith on their own. They know Faye will have to face the one machine every Coven is after—the Exanimator. No one who has ever stepped in has ever come out the same, if at all…

But Faye will do anything she can to protect those she loves, even if it costs her life.

Jaxen’s on the edge of the bed with nothing but a pair of gunmetal gray sweatpants on, an empty glass in his hand, and a half-empty bottle resting by his feet.

He looks so tortured. Looks at me as if he wishes he were seeing someone else. Someone less distant and broken. It feels like ice is eating away at my bones. Like fire is scorching every one of my nerves.

“How did your meeting go?” His strangled words slur a little.

I make my way over to him, but everything feels so unfamiliar and shaky—like walking into another plane of time. Like stepping on a spider web and finding myself caught as the truth makes its way across, ready to spin me and drain my blood.

He makes a haphazard gesture for me to sit next to him. “That good?”

“It was fine,” I lie, taking the empty glass from his hand. I grab the bottle by his feet, pour myself a shot, and toss it back, reveling in the fiery burn running down my throat that washes away the awful taste the Belladonna I took a few minutes ago left behind.

“So, this is what we’ve become then?”

I hate the desolation in his voice. There’s a desert between us without a hope for either one of us crossing it.

“What’s that?” I ask a little tersely, wiping my mouth with the back of my hand and downing another shot. I’m trying to pretend I don’t know where this is headed. That I don’t see and hear the heartache ripping our guts out right now, because I need to pretend. I need to fake that everything is okay. Need him to believe I’m fine because the moment I don’t… the moment he looks at me, knowing I’ll die and seeing that death reflected in his gaze, then it will all be over.

He tries to clear his throat, but the sound is painful. Like he’s swallowing tears. “I don’t know. Strangers? Two lovers who lie to one another? Who hide things from each other? Who can’t turn to each other whenever something bad is happening?”

I don’t recognize this Jaxen. This raw ache in his voice that scratches at the door of my heart, waiting for me to open it. I find myself missing the old him. The one who had his emotions under control. Who could take this pain and survive in it.

I set the glass down. Brace my hands on my knees as the alcohol sends my brain spinning. “I love you, Jaxen. More than I could ever explain to you.”

He laughs like he might be losing his mind. “Yet, here we are, our entire future splitting off from each other.” The cynicism in his voice is as thick as tar, and it’s choking my ability to think. To make sense of what I should and shouldn’t say.

I need a breath of fresh air. Need a new body to hide in. One where I’m safe from his prodding. Safe from myself.

“Jaxen, what am I supposed to do?”

“Stop shutting me out.” His chest heaves, heart throbbing in his neck.

I find a shadow across the room. Feel my regret slip down my cheek.

“I can’t even feel your mind anymore. It’s like you’re… you’re purposefully pulling away from me. Like you’re a ghost haunting me.” His eyes are flashing with anger now. He’s two steps from falling off the edge. From losing it all. I want to tell him everything. Want to tell him about my impending death, and that it’s easier this way because he’s going to lose me, only, not because of his curse.

Because of my curse.

“There are things, Jaxen. Things we knew would happen one way or another,” I say, and I find myself surprised by how calm I sound when my heart rattles at the cage of my bones to be free from my irrevocable torture.

I can’t believe the anger radiating off him like heat waves. The fury raging in his eyes as his hands clench and unclench against his legs, like he’s trying to contain the outburst that’s been coming my way since we returned here to Ethryeal City.

Previous books in the series:

Grab book 1 – Everlasting – for FREE until April 15th only!

Candace Knoebel is the award-winning author of Born in Flames-book one in a young adult fantasy trilogy. She discovered in 2009 through lunch breaks and late nights after putting her kids to bed, a world where she could escape the ever-pressing days of an eight to five Purgatory. And an outlet for all the voices residing in her head.

Published by 48fourteen in 2012, Born in Flames went on to win Turning the Pages Book of the Year award in February of 2013. In January of 2014, the last book in the trilogy, From the Embers, was released, thusly completing the trilogy. She now works on the Night Watchmen Series, while guzzling Red Bulls and pretending to be a ninja on Heelys. 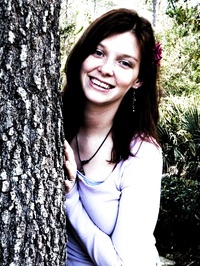