In a world where people are invulnerable to illness and death, with lives spanning hundreds of years, a sixteen-year-old becomes witness to the impossible – her brother’s failure to regenerate after death after which she suspects that she too may be mortal.

Fear My Mortality is a gripping journey of life and death. I was incredibly intrigued from the first page of this book. It’s so new and well-written that it became so easy to be captured immediately and desperate to find out more with Ava.

The world seems to be filled with a mass of psychopaths that find creative ways to main and kill each other. It’s sounds brutal, of course, except for the little detail of people coming back. Filled with fast healers and slow healers; these people that cannot die find peace with their enemies as a result. After all, what would be the point of fighting when no one can win? Except, peace is rarely that simple and as Ava discovers, there is so much more to the factions that exist in her world. The ability to heal faster is now a determination of superiority, at least to some people. The ability to kill…well it seems to be a high commodity for all the people holding a grudge.

There is this incredible cycle of action mixed with discovery as Ava and Michael run from everyone. Secrets that test the delicate trust between them as well as everyone Ava has known. She barely has time to come to grips with her brothers death before she forced to face her entire life changing. I was really shocked a few times in this book, especially with the action of Ava’s parents. As Ava struggles to survive and decide where she could ever be safe, she continues to think about the brother she lost. Ava eventually discovers all of his struggles and what he did to protect her before his death. It really hit home for me.

Michael is many things. Such a wonderfully complex character that accompanies Ava and is determined to protect her. With an extraordinary ability to heal, he might just have a chance to get her to safety relatively unharmed. Of course, it’s much more complicated than that. For one, he was the one to kill her brother. Two, he also happens to be the son of the man running the operation that’s hunting her. Three, he might have been the one to set off the chain of events that ruined her life. It sounds bad but Michael is a great character that cares for Ava at the risk of his own life.

There’s quite a interesting theme about the concept of this book. That if we are mortal, we have more compassion for others and it’s literally in our DNA. Mortals have the ability to live life to the fullest and grow. It’s brought up that Ava has this quality and shared it with her brother as well. However, strangely it was Michael that displayed the most compassion for me. Not to mention growth. He follows orders and fights like everyone else, careless about his life because he heals faster than anyone. Yet after the startling revelation that he’s killed Ava’s brother, his life has twisted and he rebels against everyone and everything he knew. He plans to leave everything behind and help Ava in anyway he can. As more of his history is revealed as well, Ava comes to understand and trust him.

I really enjoyed this book a lot. It’s action can be slightly disturbing with gore but has this amazing energy that makes the scenes flow so well. I honestly read this in a matter of hours and look forward to reading more from Frost. Ava is a great character with admirable traits and I enjoyed the amazing ferocity, compassion, and smart decisions she made. I’m really looking forward to a sequel. 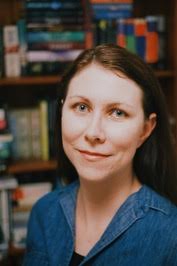 Everly Frost wrote her first story when she was nine. She grew up in a country town, lived for a little while in Japan, and worked for several years in Canberra, Australia’s capital city. Now, Everly lives in Brisbane, Australia, with her husband and two children. She doesn’t speak Japanese so often anymore, has left the cold Canberra winters behind, but has never stopped writing.

1 thought on “Fear My Mortality Review”