Kevin Pierce is a teleporter, a ladies’ man, and a loyal friend. Or so he thought.
As a genetically altered Luminary, he helps the government bring down some of the most dangerous criminals. Not very challenging if you have his special abilities. But when a group of rebel Luminaries attacks his Organization the fight for survival begins.
One shattering event after another tests the depth of his relationships, his sanity, and his powers. Emotionally torn, Kevin must choose carefully where his loyalty lies. In the middle of all the unexpected chaos he gets the biggest shock of his life when he’s faced by a betrayal he never saw coming. Angry, injured, and ready to even the score, Kevin goes Static. 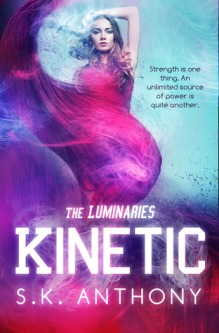 Kinetic (The Luminaries #1) on Goodreads
My Review
Static is the second installment to this series and does not disappoint.  While I do not usually prefer to read first person, S.K. Anthony has a great way of moving her story along quickly and effortlessly. Kinetic is in Annie’s point of view, a well-experienced character in The Org. Kevin, however, despite his confident attitude is still learning about this world and his own past. I would definitely recommend that you read Kinetic before Static as this intriguing world developed has a great mystery and history to unfold.
Kevin is reintroduced in this novel and brings a new exciting journey in the Luminaries universe. We see a new side to characters introduced in Kinetic and explore the charismatic and arrogant nature of Kevin. In Kinetic, I really enjoyed reading Kevin and his charming and energetic attitude. While he learns more about the Luminaries and develops his own romantic entanglements, I really came to love his character. Especially his interactions with Ryan and other new ‘super’ people.
I do have to say that at times, it was hard to understand and find the characters likable. Their choices and thought processes could be a bit fickle and frustrating. I tend to find that books that have me baffled at character decisions tend to be the ones I read faster and more eager to reach the end. In a good way! What’s a great story without growth after all?
I really enjoy the exploration in genetically modified powers as well as the complications that arise. This story arch will constantly be stretching the good vs. evil and the grey in between. Static has an amazing amount of action and drama that shocked me. With questions still to be answered, I look forward to reading Book 3.
About the Author 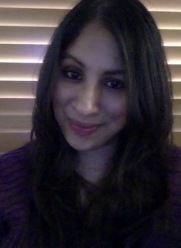 S.K. Anthony is a writer, a reader and a make-stuff-up-er who lives in New York with her husband and toddler twins. She is a wine connoisseur, which just really means she knows she loves it, and a caffeine addict. When she isn’t busy with her family she finds herself being transported into the world of imagination. Well, either that or running away from spiders…she is convinced they are out to get her!
Author Links
Website│Goodreads│Twitter│Facebook
Giveaway