AFTERLIFE is the highly anticipated sequel to AFTERMATH by Sandy Goldsworthy. This exciting Young Adult mystery romance is a must-read.

Everything seems perfect for Emma Bennett—she has a new set of friends she adores and a boyfriend she is crazy about. But when Emma sees a picture of her hunky boyfriend kissing another girl, she begins to question if his love for her is real. As she searches for the truth, will Emma be exposed to the dangers of another world?

Ben Parker enjoys the role of high school student and boyfriend to the love of his existence. Juggling his social life with his job in the Afterworld’s Bureau of Investigation is supposed to be easy for the decorated undercover agent. But when some kid captures a photo of him in a precarious position, he’s faced with lying to his girlfriend or erasing her memory. Instead, Ben makes the worst decision of his career. Now, forced to face the consequences, he loses the only thing that matters to him—Emma.

When seemingly insurmountable obstacles separate the lovers, will the two soul mates be able find their way back to each other?

It was a moment of sheer stillness.

Between the impact of the crash and the point the victims acknowledged it happened, an ugly calmness flooded their minds. In that tiny interim of time, they couldn’t quite determine if they lived or died. When they slowly opened their eyes, humans were often afraid to look anywhere but straight ahead. Until their vision cleared, victims had trouble understanding if they were safe, injured, or if their condition was serious. It was the point of in-between when pain was not yet recognized and uncertainty flourished.

The exact same feeling occurred when one transitioned.

“Emma,” I whispered, removing the invisible web I cloaked over her prior to the accident. The intricate weave of the net held her in place during impact. She couldn’t see the neon blue glow, but I could, and so could headquarters. Severing my tether and going off grid to tell her the truth about me only worked when I wasn’t using excessive powers.

Crashing into a hundred-year-old oak tree was cause for use of excessive powers. Except, I hadn’t worried about the consequences—at the time.

“Emma,” I called again. This time, I put my hand on her neck. My fingers searched for her pulse. I pressed the tip of my forefinger on her vein and felt the slow, steady thump. Slight pressure increased her pulse to the speed of mine. In seconds, she opened her eyes. “Shhhh. It’s okay. You’re okay.”

She blinked. When she looked forward, all she saw was me. Moments passed as her mind recalibrated her location, the accident, and the escape from the tavern. When she teetered on recalling our conversation and the confusion of me telling her who I was, I knew I had to compel her.

It was the right thing to do.

I stared into her eyes and watched her pupils dilate. In that instant, she was mine. I could make her do anything I wanted—tell her a lie she’d believe as truth, make her forget I cheated, or have her remember our past life together. She was under my control.

“Ben?” Emma whispered. My concentration was broken by the softness of her voice. My chance to compel her was lost.

“What happened—?” Emma tried leaning forward, but the space around us was constricting. Emma’s door was crushed inward, her seat shifted to the middle of the vehicle. The front bench seat was now diagonal and further back than its original position. It rested inches from Emma’s knees. The 1980’s Chevrolet sedan was now a part of the tall oak tree.

“Shhh. We were in an accident. How do you feel?”

Emma looked around, her eyes widening. Panic crossed her mind, and I held her hand.

“It’s okay. Are you hurt?” I asked, although I already knew she was fine. I had protected her, after all. She calmed when I stroked my thumb over her fingers.

She shook her head.

Lights glowed from behind us. Distant voices sounded, and I knew it was a matter of time. I placed my hand on the inside of her wrist. Squeezing gently and only for an instant, I was able to increase Emma’s blood pressure long enough for the alcohol content to dissipate. A blood test would be the first test run at a hospital to verify if intoxication was a factor. It would be devastating in Emma’s mind if her aunt learned she’d been drinking. If only I could do the same to Lucas and Brinn.

A flashlight shone in the rear window, and someone yelled. “Anyone hurt?”

I cleared my throat and called back. “We’re pinned.”

“Aaaahhh.” A moan crept up, like a crescendo, from deep within Brinn’s diaphragm. She extended her hand toward Lucas, but she stopped when she realized the dashboard filled the gap between them. “Lucas?” she croaked. 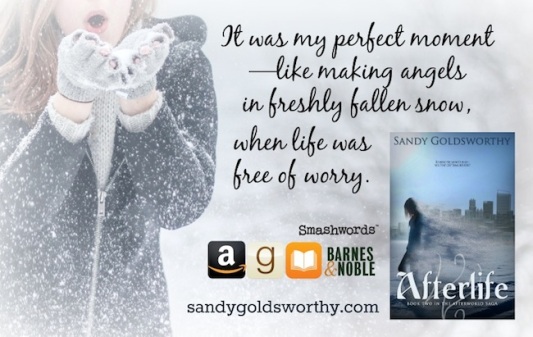 What is your writing inspiration?

That’s an interesting question. Ever since I can remember, I’ve been inspired to write. In high school, my English teacher didn’t love the assignment I turned in. I thought it was perfect—just what she was looking for. It wasn’t.

The assignment was to describe a house. I wrote that the door was red. My teacher didn’t like just red. She wanted to really “see” the red. It was a turning point for me. Instead of being a chore, writing was something I enjoyed. It was an art to me.

Every time I read a good book, I get inspired to write. Great characters and twisting plots motivate me to craft my story—to take it to the next level.

Aftermath started when the character of Ben Parker came to life. About five years ago, I had a very vivid dream of a train derailment. Railcars tumbled off a ridge, landing on top of each other in a ravine. In my dream, there was a young man that appeared untouched by the accident. Once everything settled, he pulled the victims from the crash site and escorted them to the afterworld. I still remember waking up, my heart pounding in my chest.

Sandy Goldsworthy was raised in Sheboygan, Wisconsin, blocks from the rocky shores of Lake Michigan. As a child, she fantasized about becoming an author. She jotted story lines in spiral notebooks and drew images of characters that never came to life. Her passion for putting pen to paper began when her high school English teacher inspired her to be more descriptive in her work. Ever since, Sandy dabbled in creative writing, searching for that perfect shade of red and that character you want to get to know.

A graduate from the University of Wisconsin-Oshkosh, Sandy is the YA author of the paranormal romance series, The Afterworld Saga. She spends her days managing corporate client programs, and her nights and weekends drafting new plot lines in spiral notebooks. She resides in southeastern Wisconsin with her husband, two children, and an energetic puppy. Learn more at www.sandygoldsworthy.com.