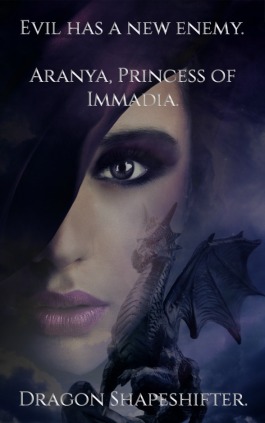 Chained to a rock and tossed off a cliff by her boyfriend, Aranya is executed for high treason against the Sylakian Empire. Falling a league into the deadly Cloudlands is not a fate she ever envisaged. But what if she did not die? What if she could spread her wings and fly?

Long ago, Dragons ruled the Island-World above the Cloudlands. But their Human slaves cast off the chains of Dragonish tyranny. Humans spread across the Islands in their flying Dragonships, colonising, building and warring. Now, the all-conquering Sylakians have defeated the last bastion of freedom–the Island-Kingdom of Immadia.

I was blown away by the magnitude of this story. Shiromi Arseio narrates an incredible and larger than life tale. I did have a bit of issues when I first started listening but soon got used to the terms and names as more were introduced. I liked Arseio’s accent as well. It definitely fit the genre and she did a great job of putting energy and inflection into every scene. Of course, every time I listen to someone read with an accent in an audiobook, I also tend to dream with that accent, so that was interesting.

Aranya starts out very different from the other princesses, with a fire in her and dreams of a dragon, she sometimes struggles in her position. After being betrayed and sentenced to death, she is tied up and thrown off a cliff and manages to survive by shapeshifting into a dragon. I absolutely love the concept of this book. Books with dragons are always amazing to read but I really enjoyed reading about the dragon herself and the rider she meets. She soon continues to gain newfound powers that she works to control. The battles that occur were crazy and amazing as well. At times, this fast paced novel almost left me behind and I did have to go back a few times to listen again.

Secchia wrote a very strong female-driven book which was really cool. While we have male characters in the book, it centers into the life of dragons, dragon shifting, and dragon riders. So pretty much exactly what I wanted to read when I first signed up to review this book.

I’d definitely recommend getting this audiobook and encourage everyone to enter the super generous giveaway!

Marc is a South African-born dragon masquerading as an author, who loves writing about dragons and Africa, preferably both at the same time. He lives and works in Ethiopia with his wife and 4 children, 2 dogs and a variable number of marabou storks that roost on the acacia trees out back. On a good night there are also hyenas patrolling the back fence.

He’s the author of 21 fantasy books in 3 languages (2 more languages coming this year – watch this space!), including 8 rip-roaring dragon fantasy bestsellers. Dragonfriend won a Gold Award for Fantasy in the 2016 IPPY Book Awards. Look out for Whisper Alive, his latest release. The 4th tale in the Dragonfriend series, Dragonstar, is coming soon!

When he’s not writing about Africa or dragons Marc can be found travelling to remote locations. He thinks there’s nothing better than standing on a mountaintop wondering what lies over the next horizon.

A native of London, England, Shiromi Arserio is a stage actor, voice talent and audiobook narrator. She holds a B.A. in Theatre from Rose Bruford College of Theatre and Performance. In addition to narrating dozens of audiobooks, her voice can be heard in documentaries, e-learning projects and video games such as Nancy Drew: The Shattered Medallion. Shiromi currently resides in the Seattle area with her husband and her two furbabies.