A Veil of Shadows (The Shadow Gate Chronicles #2)

A desperate search leads to a new world

Naomi and Gavin are on the run. Having narrowly escaped Azzmon’s clutches, they find themselves hunted by Malick, another Shade Lord. He has amassed an army of foul creatures, and the city-state of Tarravale stands on the brink of chaos. Naomi’s ability to open Shadow Gates makes her an alluring target, and the Shade Lord will stop at nothing to possess her. The children must find a way to escape before their new world is buried in an unwinnable war.

Naomi was desperate to get away. She looked for any opening in the crowd but found a growing sea of figures filling in the shadows of the night. Another surge pressed up against her back, and she stumbled forward as someone pushed her from behind. Naomi fought to get back into the crowd, but something grabbed her hand. She was yanked out into the line of dancing fiends, lunging around the fire before she remembered her armor. The drunken, foul thing she’d stripped at the edge of the foothills had been one of the goblins, and it was apparent they expected her to join in on the dance.

The beat came from a row of goblins seated in a line close to the fire. The creatures slammed their fists on crude instruments in a semi-coordinated arrangement. Naomi was pulled into a loose circle, prancing around the musicians. Terror instantly set in and she froze. It took two well-placed jabs in her side to get her moving again.

It all started with a hop. Naomi focused on the creature in front of her and did her best to ignore the hooting and hollering of the surrounding spectators. She caught on to the steps as her growing panic mixed with a strange determination to get it right. It took a few moments for her to grasp the basic moves, and then she added in a few of her own to make it her thing. She tried to forget that she was boogying in the very center of an enemy camp. Her mental block had little effect on keeping out the roar of the crowd, but it allowed her to remain focused on what she was doing.

Her unfitted armor came with its own share of issues. The chest plate was too big for a teenage girl while managing to be too short at the same time. Naomi was forced to hold onto her helmet with both hands to keep it from slipping off as she danced. The pace of the drums picked up, encouraging the performers to do the same. The train of goblins moved at an alarming speed, and before long Naomi had to hop, skip, and jump to keep up. The entire ordeal culminated in a group howl that scared her half to death.

A sudden bellow of applause from the crowd mixed with shouts and whistles. One of the onlookers seized Naomi by the shoulders and shook her furiously. She thought he might strike her before he finally lifted his head back and laughed as loud as a foghorn. The man let her go, and she stumbled backwards. The goblins broke from the line, and Naomi found herself alone by the fire. Her predicament quickly shifted from bad to worse. The surrounding sea of goblins unlatched their armor, and it wasn’t long before Naomi was the only figure wearing a helmet.

The attention started with a few glances, first from the goblins and then the men and serpent-kind as they headed back to their own gatherings. Naomi walked away, keeping a straight line for the open divide between the goblin circle and an adjacent gathering of men. She heard the patter of boots following after her. They called out in the goblin’s foul language, but she didn’t dare turn around. The calls echoed from one gathering to the next, and the commotion was enough to draw several curious eyes.

The first real sign of trouble came from a hard pinch on her arm. A hand took a firm hold of her cloak and wouldn’t let go. Naomi strained to pull away but couldn’t. She saw figures moving toward her from the corners of the gathering. The goblins appeared to know something was up, and her chances of escape shrank by the moment. She finally gave in and spun around, coming face to face with a goblin’s bulbous head, its eyes glowing bright yellow in the firelight. Another powerful pull flung her around in the opposite direction, and she was sure the ruse was up. 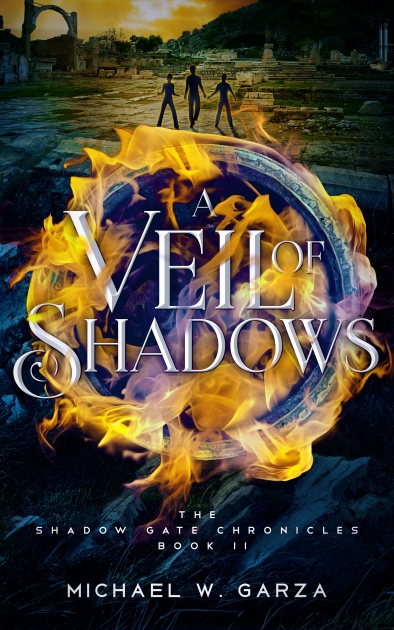 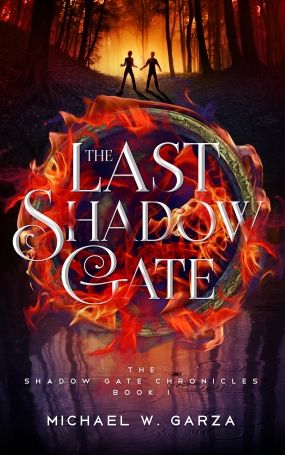 Michael W. Garza often finds himself wondering where his inspiration will come from next and in what form his imagination will bring it to life. The outcomes regularly surprise him and it’s always his ambition to amaze those curious enough to follow him and take in those results. He hopes everyone will find something that frightens, surprises, or simply astonishes them. 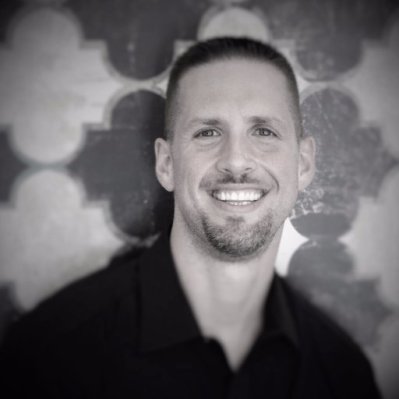 4 thoughts on “A Veil of Shadows Promo Post and Giveaway”