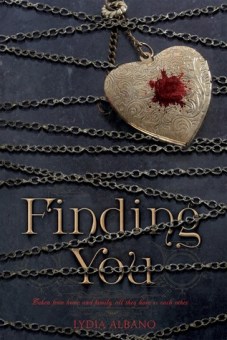 Taken from home and family, all they have is each other.

Isla is kidnapped from a train platform in broad daylight, and thrust into a nightmare when she is sold to a sadistic aristocrat. Locked in a dungeon with a dozen other girls, Isla’s only comfort is a locket and the memory of the boy she loves. But as days pass and more girls disappear, she realizes that help is not coming… If they’re going to survive, they’ll have to escape on their own.

Swoon Reads is proud to present Lydia Albano’s debut novel, a powerful story of a teen girl finding strength and hope in even the worst circumstances.

Finding You isn’t for the faint of heart. This book follows the tragic but inspiring tale of Isla. Isla is a young girl in love that lives with her father and spends her days reading for the next adventure. Her longtime friend and love interest, Tam, dreams of the both of them exploring the world. One day, however, she’s stunned to hear Tam has enlisted in the army and is leaving very soon. This sets off the heartbreaking and tense events of her kidnapping.

Isla is more than just a girl in love though. She’s smart and braver than she knows. Trapped with other girls like her, she holds a strength in her that inspires the rest to survive and escape their prison. Isla, at times, doubts her decisions and wants desperately to be rescued but will suddenly and fearlessly fight to be free and protect others. She’s inherently good. Even feeling bad about stealing food or other girls taking her place, Isla makes heartbreaking decisions that she knows will change her forever. Her connection to Tam and the locket he gives her, gives her strength to retain who she is. Isla’s journey and unending strength was powerful to read. Lydia Albano brought such life and sometimes grittiness to her scenes. The light and the dark seemed to fly off the page and I never wanted to put this down until I knew Isla was safe. It was more than just Isla’s story though.

The underlying story is about a girl that is forced into a horrible injustice. When she overcomes this and grows in the process, she still chooses to keep going. Isla and her friends won’t stop until ones like them are free.

Future readers note: I would caution that it does have some graphic and sensitive topics but nothing too harrowing. This can cause some issues for people with trigger words. It doesn’t depict these issues in an unjust manner and I do recommend this book.

Lydia Albano is a (self-proclaimed) Bunburyist living in Cambridge, Massachusetts, where she promotes Oxford commas, spends her money on musical theater, and demands the Myers-Briggs letters of everyone she meets. Her debut novel, Finding You, will be released in September, 2017, with SwoonReads/Macmillan.

2 thoughts on “Finding You: Review”